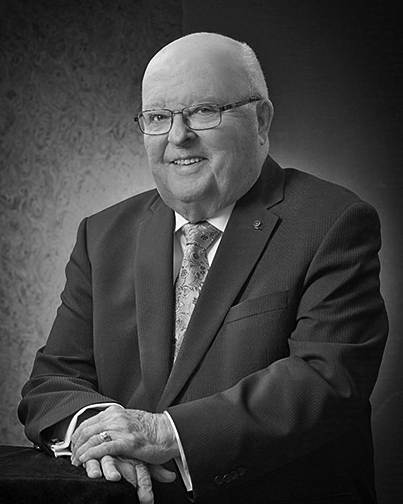 Allan Bailey, longtime Yorkton resident and proprietor of Bailey’s Funeral Home, passed away peacefully in the early morning hours of Tuesday, Jan. 3, 2023.  He was 90 years of age.
William Allan Bailey was born on Aug. 16, 1932 in Winnipeg, Man. to Ray and Annie (nee Boyd) Bailey of Melville, Sask. He was born during the Great Depression and like everyone in that generation this stayed with him throughout his life. He appreciated things more, he didn’t like waste, especially food and water. It was a very different time. His mother was a school teacher and could not have a child and be employed. So Allan was taken to be raised by another family so she could continue to work. Allan was raised as Allan Cockell by Walter and Hattie Cockell in Winnipeg. At the age of 12 he moved to Melville to be with his biological parents. About four years later Allan was tested positive for TB and spent about a year at Fort San. He returned to Melville and graduated high school.
Influenced by his grandfather W. T. Bailey he decided to become a funeral director. Allan apprenticed with David Delziel in Prince Albert and went on to graduate with honours at the Cincinnati College of Mortuary Sciences. He returned to Prince Albert where he met his future bride, Colleen Cavanagh. Allan soon moved for an opportunity to work as a licensed funeral director in Winnipeg, with Clarke Leatherdale and later with Gordon Patterson at Chapel Lawn. Colleen soon followed to Winnipeg and this is where their beautiful love blossomed. They were united in marriage on Sept. 5, 1959. While Allan worked in funeral services, Colleen worked in retail and later at the Winnipeg Tribune.
The young couple worked and played hard, becoming active in Jaycees and the Jaycettes. There, many of their strong interests in developing friendships, displaying leadership, volunteering to make a difference, and providing service developed and blossomed. In Jaycees they learned many of the skills that would serve them throughout their busy lives volunteering for many activities and with many organizations.
Allan and Colleen moved to Yorkton in 1962 to partner and manage a new funeral home and took over operations of a cemetery that was bankrupt and was operated by the provincial government. This is where he spent the rest of his life and his career that spanned over 60 years.
Allan served his community without fanfare. He served on the City of Yorkton Council as an alderman and mayor, and contributing to many organizations including Jaycees, Rotary Club, the Masonic Lodge, Yorkton Short Film and Video Festival, Hospital Board and Westview United Church. He was instrumental in forming a regional library in the area and public approval of the Agriplex (now Gallagher Centre), and was an avid supporter of arts and culture in his community and province. He served as president of his provincial and western Canadian professional organizations. He received honorary lifetime memberships in many of these organizations and the Saskatchewan Volunteer Medal, and would have received the Queens Jubilee Medal later this month.
Allan had a wonderful gift to put others before himself and make everyone around him feel special and cared for. He had a remarkable memory for names and tried to recognize birthdays and special events of everyone around him. His family is grateful for the many blessings he has shown us. He will be remembered for his gracious spirit, his wonderful sense of humour, and his kindness.
Allan was predeceased by his wife Colleen in 2006; his sister, Irene Kulson; and a nephew, Jim Kulson. He is survived by three sons and their families: Boyd (Rhonda) of Yorkton and their four children: Geralee (Brandon) Nicol (children Quinne and Huxley), Joseph (Natalie)
Austman (son Tiago), Jacob (Jessica) Bailey (son Jaxtyn) and Rebekah Bailey (daughter Kaia); Burton (Dr. Kirsten Westberg) of Red Deer, AB (children Anna, Erik, Margaretta and Josephine); Raymond (Crystal) of Yorkton; and his niece, Jan Smith of Winnipeg.
The funeral service was held on Saturday, Jan. 7, 2023 from Westview United Church with Rev. Deborah Smith officiating. Son Raymond gave the eulogy. Scripiture readers were Rhonda Crystal and Margaretta Bailey. Organist, Shani Apland led the congregation in the singing of the hymns ‘Abide With Me’, ‘Blessed Assurance’’, and ‘We Shall Go Out With Hope of Resurrection’. The choir anthem was ‘Great is Thy Faithfulness’.
The interment took place in the Garden of St. John at the Yorkton Memorial Gardens, pallbearers were Dean Petersen, Larry German, Murray Bialobzyski, Ronna Nagy, Orville Herron, Denton Keating, Joseph Austman, Jacob Bailey and Erik Bailey. A reception followed at St. Mary’s Cultural Centre.
Condolences can be left at baileysfuneralhome.com