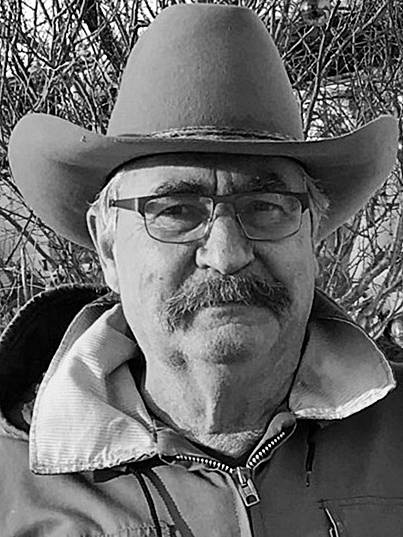 Gerald Benjamin Pengilly (Ben) headed off to manage the Big Pasture in the Sky on Friday, October 15th after
a year’s journey through brain cancer. Ben lived on his beloved ranch near Melville, Saskatchewan since 2003 and filled his world with amazing experiences of travel, motorcycling, grandkids, ranching, environmentalism and making people feel slightly less cool when he rolled up in his GTO.
Ben was born in 1949 in Lethbridge, Alberta. He grew up on the Pengilly Farm on the North Hill later taking over that farm and raising his kids there and then going on the Great Saskatchewan Adventure with his wife, Lee, to create the Melville Ranch.
Ben’s fan club includes his partner, Patricia Ewing, his kids, Carrie Pengilly (Jared Franklin) and Daniel Pengilly (Katie) and his extremely adored grandkids, Cooper Franklin and Tallulah and Brewer Pengilly. His big sister, Dianne Reed (Ian) and his little brothers, Gordon Pengilly (Connie Zerger) and Douglas Pengilly (Elaine Unger-Pengilly) and his mother-in-law, Doreen Reinhardt and his nieces and nephews Kristin, Karen, Kurtis, Kent, Nick, Skyler, Zachary and Katie. Like his siblings are Bob and Sue Menzies. Like his kids are Erin, Danny, Avery and Stephen McGlenn. Like his grandkids are Ross McGlenn and Amelie and George Racine.
Ben is predeceased by his wife, Lee Pengilly, his parents, Dan and Eva Pengilly and his brother Richard Pengilly.
Ben had many stories that would suddenly be told that would catch his family and friends off guard. He would enjoy their reactions and sometimes shock, sometimes horror and occasionally disbelief. Stories of getting caught in a traffic circle in Paris with his VW Van and working in Inuvik and living on the beach in Morocco, coaching his softball girls in Stirling, winter camping with his best friend and the random painting he found in the McNally school and the awesome heroic events from the basketball court at the University of Alberta to the many random people he helped over the years. And many more stories that were still being told within memories shared of Cypress Hills camping, horseback riding, fishing and the millions of farmkid stories.
Friends were drawn to Ben all throughout his life. And Ben made friends quickly – whether the paramedics who transported him after he was taken down by two bulls or the many baseball teammates from elementary school right through to his senior ball team.
Ben’s heart was connected to the land and he trained in Holistic Management and consulted for the Assiniboine Watershed as well as mentored many farmers and ranchers over the years. He believed in humanity working closely with nature to create harmony.
He loved good blues, good Scotch and good company. He was extremely grateful for all of the outstanding people in his life. The Big Sky pasture has been given the greatest of Herd Managers.
Ben and his family are grateful to the team at the Melville hospital and thank them for all the love, kindness and guidance.
A Celebration of Life will be held in Lethbridge, Alberta on Saturday, October 23rd at the Sandman Signature Lethbridge Lodge in Anton’s Ballroom at 2:00 pm. Proof of COVID-19 vaccination will be required along with masks. In lieu of flowers, donations may be made to the environmental organization of your choice.