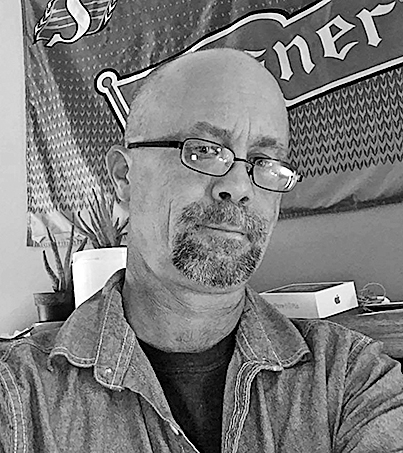 It is with deep sadness that we share with you the passing of Dwight Edward John Pawelko of Birmingham, SK, on Sunday, May 30, 2021, at the age of 50 years.
Dwight leaves behind to mourn his loss: his children, Jared and Jade; father Edward; sisters Bernadette (Vernon) Giesbrecht, Cecilia (Ray) Kessel and Angela (Kurt) Oehler, as well as his seven nieces and nephews, four great-nephews and one great-niece. He was predeceased by his mom, Johanna Pawelko (nee Augustine), and his grandson, Elliott Vallee-Pawelko.
Dwight had spent most of his adult years as a general labourer, working in areas that involved general construction, drywall and carpet installation. In 2008, he suffered from major burns to a majority of his left leg, resulting in him being unable to work.
Dwight took pride in keeping his yard looking great. Most summer days you could drive by and see him out somewhere in the yard on the lawn tractor. He enjoyed crosswords, gardening, bonfires and hanging out with his friends drinking a few beer.
A celebration of Dwight’s life was held Friday, June 4, 2021, at Matthews Funeral Home with Shelley Morris officiating. A eulogy was presented by Jeanette Pawelko and the urn bearers were Dwight’s children, Jared and Jade. His godchild, Shaun Kessel, was an honorary bearer. Interment will take place in the Lemberg Cemetery at a later date.
Arrangements were entrusted to Matthews Funeral Home, Melville.