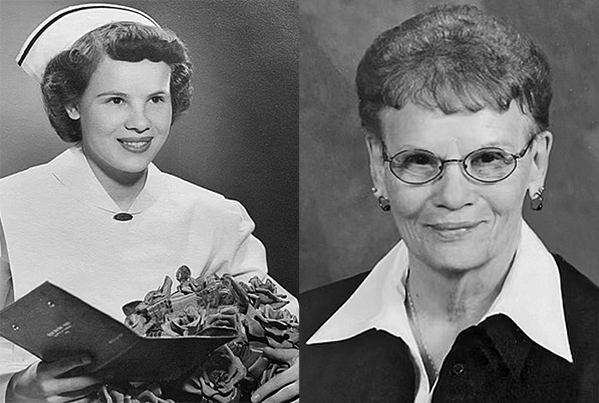 Rita Marie Folk (Rambow) passed away peacefully on Sunday, May 30, 2021 at Echo Lodge Special Care Home in Fort Qu’Appelle, Sask.
Rita was born on July 7, 1930 in Gravelbourg, Sask. and grew up on the family farm in Hodgeville. She was predeceased by her husband Con; her parents, John and Sara Rambow (Staab); her sister Theresa; and her brother Raymond.
Rita is survived by her son, Doug (Jan McLellan), daughters, Lorrie (Mark
Piller) and Lynda (Gerry Putz); grandchildren, Julie (Peter Woldu), Allie (Silviu
Biclea), Melissa, Luke
Piller (Krista), Lindsey (Brett Miller), Adam Putz (Nicole), and Jarrod Putz (Nicole); great-grandchildren Theo, Avery, Bennett, Genevieve, Lila, Jamie, Owen and Zoey; sister-in-law, Elaine Rambow and their family.
Rita attended school in the Hodgeville area and completed Grade 12 at Thevenet College in Gravelbourg in 1948. She then moved to Regina to train as a nurse at the Grey Nuns School of Nursing, from which she graduated in 1951. It was at the Grey Nuns Hospital where she met her beloved husband, Con. In 1952, their 65-year relationship of love and dedication began with their marriage.
Two years later, Con built their house on Mullin Avenue, the same year they began their family. There, they enjoyed their life surrounded by family and friends, where Rita was actively involved in the lives of her children who were all involved in a wide variety of sports and activities, and Rita was at every game. She volunteered her time in many capacities, including organizing a softball league for girls in East Regina.
Rita was passionate about her career as a nurse, returning part time to work in 1961. She continued to further her education and her vocation at the Grey Nuns (Pasqua) Hospital, serving in many supervisory capacities including the Director of Nursing for 11 years, eventually retiring in 1993 as Assistant Administrator in Charge of Nursing and numerous other departments. She was a very dedicated nursing administrator who worked long, but rewarding days. She and Con took great joy in the friendships formed through their connections at the hospital.
Rita and Con enjoyed their retirement in the Fort Qu’Appelle Resort Village of B-Say-Tah, where Rita was active at Our Lady of Sorrows parish in Fort Qu’Appelle as part of the choir and parish council. She bowled for a number of years, made many new friends, and hosted many card games and happy hours. They continued their close relationship with her brother, Ray and his wife Elaine, a friendship that lasted their entire lifetimes.
Rita was a woman of many talents, a very artistic person who loved crafts, painting, gardening, creative writing and nature. She had an endless amount of energy and enthusiasm. Nothing meant more to her than spending time with her family and friends, especially her grandchildren and great-grandchildren.
Special thanks to the exceptional staff at the Echo Lodge Special Care Home in Fort Qu’Appelle and to Father Bert for his spiritual support. Those wishing to donate in Rita’s memory may do so to the Hospitals of Regina Foundation or the Echo Lodge Ladies Auxiliary.
Due to Covid-19 restrictions a private, family service will be held at a later date.
Arrangements entrusted to Conley Funeral Home in Fort Qu’Appelle, Sask., 306-332-0555.