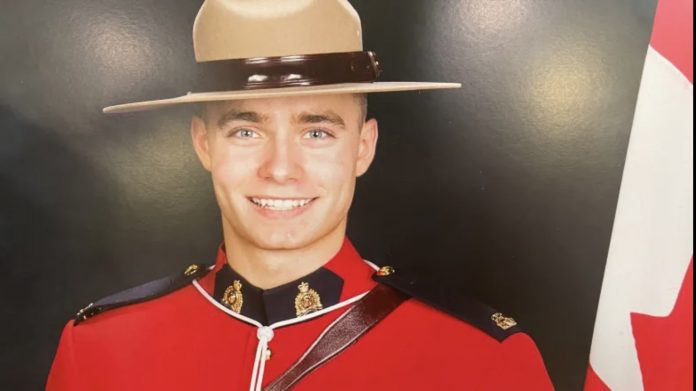 The RCMP are in shock and mourning after 26-year old Cst. Shelby Patton of the Indian Head RCMP detachment was killed while on-duty. Patton was a six year veteran with the RCMP.

Rhonda Blackmore, the assistant commissioner of the Saskatchewan RCMP, said Patton was killed while initiating a stop with a stolen vehicle in the town of Wolseley around 8 a.m. on Saturday morning.

He was struck by the vehicle and later died on scene. Patton was 26-years-old.

At around 10 a.m. this morning a press released was issued stating there was increased police presence in the areas surrounding the communities of Wolseley and Francis. Blackmore confirmed the death and identity of the officer during a news conference held at 5 p.m..

Premier Scott Moe offered his condolences on behalf of the province.

“It is with tremendous sorrow that Saskatchewan mourns the loss of RCMP Constable Shelby Patton, who was killed in the line of duty this morning in Wolseley, SK. Our grief is only matched by our tremendous gratitude to Constable Patton for his service, and to every police officer who serves and protects us every day.My deepest condolences to Constable Patton’s wife, family, friends and colleagues.”

The National Police Federation also issued a statement saying, “The NPF’s Members and team are heartbroken by the death of Constable Shelby Patton, age 26, whose life was taken senselessly and tragically near Wolseley, Saskatchewan while protecting his community. Our thoughts and support go out to Cst. Patton’s family, friends and colleagues. Cst. Patton served his community and country at the Indian Head RCMP for six years, and we thank him for his service, dedication and bravery. No one goes on shift expecting it to be their last, but this is a sad and dangerous reality of police work and Cst. Patton made the ultimate sacrifice.”

Two suspects, a man and a woman, were arrested in the Francis area around 10 a.m. on Saturday in connection with the incident.