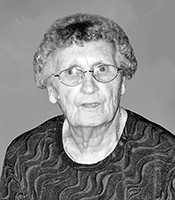 WALKER – Gertrude Elleanor Walker (nee White), born Aug. 12, 1913 and long-time resident of the Pheasant Forks district and Balcarres, passed away peacefully at Grenfell Pioneer Home on Wednesday, Sept. 16, 2015 at the age of 102 years, with her family by her side.
Gertrude was predeceased by her parents, Joseph and Frances (Hanson) White; her husband, Harold in 1994; her sisters, Mary, Esther, Doris and Dorothy; her brother, Tom; and her son-in-law, Lowell.
She leaves to cherish her memory: her children, Mary Christie, Wilfred (Donna) Walker, Shirley Walker and Bernice (Richard) Mueller; grandchildren, Wade (Gail), Jason (Andrea), Tara (Sheldon), Chantal (Eric), Brooke (Rebecca), Stacey (Steve) and Nicole; great-grandchildren, Ory (Amy), Dakota (Max), Hailey, Kaitlynd, Cambrie, Woodrow and Madison; a sister, Flo; and a number of nieces and nephews.
Gertie was born in the Finnie district and moved to the Pheasant Forks district in 1920 with her family. She started school at Garden School and finished her education at the Pheasant Forks two-room school. Her one aim and ambition was to be a teacher, but being the Dirty 30s there was no money for college. This meant Gertie started working for several families in the Pheasant Forks and Copeland areas. She spent a winter in Rocky Mountain House, AB looking after Uncle Will White’s family of four girls.
On Nov. 2, 1937 Gertie married Harold Walker. They spent that winter working for Eric and Bea Stilborn. In April 1938 they began farming on their own north of Finnie on a farm they called “Happy Acres.” In March 1941 they moved to the Joe Featherstone farm in the Pheasant Forks district. Harold and Gertie semi-retired in 1973. They bought a house in Balcarres and lived there in winter and back to the farm for the summers. In 1979 they rented the land to family and retired after years of hard work. Life was busy with mixed farming — grain, cattle, horses, pigs, chickens and turkeys. The very large garden helped feed the family. For nearly two years, Gertie operated a small cafe, “Conway,” in Duff.
Now for town life — Gertie loved to knit, and up to a few months ago, her hands were kept busy knitting squares for Angels of Warmth. She enjoyed playing cards, games, reading, doing puzzles, gardening, walking, spending time with grandchildren and great-grandchildren, cooking, canning, baking and traveling. She was a whiz at math, loved working with numbers and could recite the alphabet backwards. Birthdays were always remembered.
Gertie remained in her own home with daughter Shirley until Oct. 22, 2014. Failing health necessitated a move to Balcarres BICC and later to Grenfell Pioneer Home.
Thanks, Mom, for being an example of determination, independence and a never-give-up attitude; we have learned a lot from you and will be forever grateful. We love and miss you.
Gertie’s funeral service was held on Saturday, Sept. 26, 2015 at 11 a.m. from Matthews
Funeral Home, Melville, SK with Rev. Brian Mee officiating. The organist was Gaylene Matthews.
Following interment in Pheasant Forks Cemetery, a lunch took place at St. Paul Anglican Church, Balcarres at 2 p.m.
Arrangements were entrusted to Matthews Funeral Home, Melville.
The family would like to thank everyone for their many acts of kindness shown to them during this difficult time