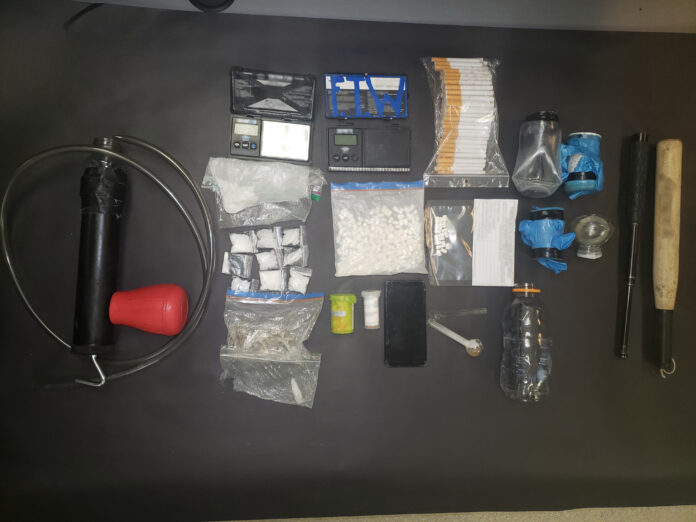 On January 24, 2023 at approximately 11:20 a.m., officers from Saskatchewan RCMP’s Yorkton Combined Traffic Services Saskatchewan observed a truck fail to slow to 60 km/hr when passing an emergency vehicle on Highway #16, west of Yorkton.

The officers pulled the truck over and observed drug paraphernalia in plain view.

The two adult male occupants were detained and the truck was searched. Officer located and seized:

– a few hundred pills, some believed to be morphine;

– one carton of unstamped cigarettes;

– an open bottle of vodka; and

A photo of the seized items is attached.

32-year-old Dany Caron from Grand-Remous, QC and 49-year-old Jason Palmer from Edmonton, AB are each charged with:

– one count, possession for the purpose of trafficking (methamphetamine), Section 5(2), Controlled Drugs and Substances Act;

– one count, possession of a weapon for a dangerous purpose, Section 88(2), Criminal Code; and

– one count, possession of unstamped tobacco that is not blackstock, Section 11(8), Tobacco tax Act.

Both are scheduled to appear in Yorkton Provincial Court on January 26, 2022.

The occupants were also ticketed for various provincial offences including failing to slow to 60 km/hr while passing an emergency vehicle and having open liquor and cannabis in a vehicle.

Chris Ashfield - January 24, 2023
At approximately 6:55 p.m. on January 20, Esterhazy RCMP received a report of a collision between a train and an SUV at a crossing...