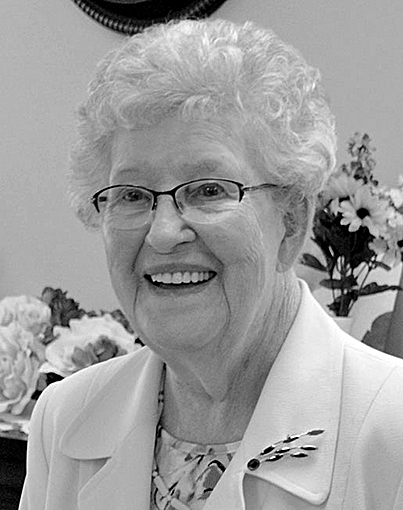 Edna Bertha Seib (nee Bierwagen) passed away peacefully into the arms of Jesus her Lord and Saviour on Thursday, Aug. 11, 2022, just 12 days short of her 98th birthday.
Edna was born Aug. 23, 1924, to Rudolph and Annie (nee Garbe) Bierwagen on a farm north of Fenwood, SK. She grew up on the family farm and attended Greenbush School. On Oct. 30, 1947, she married her sweetheart, Reinhold Seib, and they took up farming in the Koenigsberg district. Later the farm was expanded into a dairy operation. In 1975 the farm was sold, and they moved into Melville. After farming, Mom enjoyed many camping and fishing trips with the family, which were a highlight of her summer.
Edna loved gardening and flowers, and the produce from her garden was shared with many. She enjoyed baking, sewing, knitting and crocheting; we all have a quilt, afghan, sweater or mittens that she made. Visitors were always welcomed with her warm smile and hospitality, along with plenty of good food; (oh and don’t forget the games, Yahtzee and Uno, at which she was champion). She enjoyed spending time with family and friends and especially looked forward to visits from her grandchildren and great-grandchildren.
On her 90th birthday, Edna moved to Highland Manor in Regina to be closer to family. She quickly made many new friends and enjoyed games night and shuffleboard with them. After moving to Regina in 2014, Edna became a member of ‘Angels for Warmth’ and knit many scarves and mittens for those in need. She moved into Lilac Lane at Regina Lutheran Home in October 2021. Her motto was ‘I will bloom wherever I am planted’. Edna lived her life to the fullest and always had a sweet smile for everyone she met. Most of all, Edna loved Jesus and shared his love with many.
Edna was predeceased by her husband, Reinhold; her parents, Rudolph and Annie; parents-in-law George and Sophie; siblings Martha, Bertha, Albert, Walter, Elizabeth, Elsie, Annie, Frieda, Julius, William, Edward, Oscar; brothers- and sisters-in-law Ernie Reinheimer, Walter Bahsler; Carl and Edith Seib, Edward and Alvina Seib.
Edna leaves to cherish her memory: her daughter, Lorraine (Ervin) of Regina; three sons, Dennis (Ruth) of Saskatoon, Terry (Joanne) of Yorkton and Randy (Carla) of Saskatoon; 11 grandchildren and 16 great-grandchildren; one sister, Irene Thompson of Salmon Arm, BC; four sisters-in-law, Katie Bierwagen of Melville, Esther Bahsler of Langenburg, Violet Reinheimer of Melville and Evelyn (Ed) Mueller of Kitchener, ON; two brothers-in-law, Albert (Rhoda) of Red Deer, AB, and John (Ellen) of Calgary, AB; as well as many nieces, nephews and friends.
Edna’s funeral service was held Monday, Aug. 22, 2022, at Matthews Funeral Home, Melville, followed by interment in Koenigsberg Cemetery, Melville district.
Arrangements were entrusted to Matthews Funeral Home, Melville.