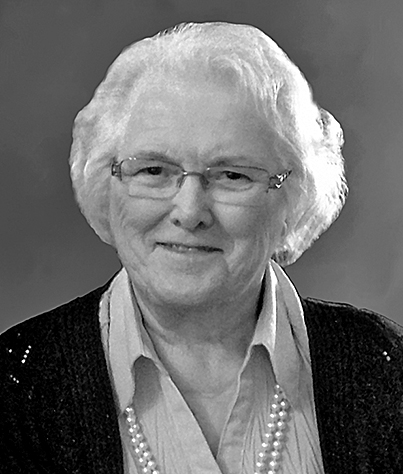 After fighting the good fight, at age 89, in the early hours of Monday, July 18, 2022, God quietly called Esther Schindel, of Melville, home while she slept.
Esther Miller was born on Nov. 26, 1932, on the family farm in the Koenigsberg district, the youngest child of George and Emelia Miller. She received her education at the school in Birmingham.
On April 2, 1954, Esther married William Schindel at the Koenigsberg country church. Together, they then began a mixed-farming operation and raised their two daughters, who arrived within the next few years. Like many couples of their day, they worked side-by-side, enduring tough times, always working hard and hoping for something better. Better times did come, and there were many good times together with family and friends. Not long ago, Esther recalled special times with her sisters-in-law making perogies and quilting in winter; and there was also snowmobiling from farm to farm for coffee with the Schindel clan.
Never having worked outside the home, Esther was the ultimate homemaker. When she wasn’t helping William with the outside chores, she spent her days cooking, baking, tending a garden, raising chickens and sewing clothes for herself and her girls. In early years, producing a delicious Christmas dinner for extended family over a cookstove in their small three-room home didn’t seem like a big deal to her. Baking was also a favourite pastime, and she shared many delicious treats over the years. Up until a few years ago, her grandchildren knew that after paying a visit, they’d be going home with an ice cream gallon full of the best cookies ever, especially jam-jams which were her specialty. After she entered the hospital for the last time in December, we were somewhat surprised to find the overwhelming amount of baking supplies still in her cupboards. She was always prepared, just on the off chance that she’d have a day where she felt good enough to bake just one more batch of cookies. Somehow in the midst of all that work, Esther still found time to keep diaries and calendars with notes of activities and daily life on the farm – treasures that will now be read over and over. William and Esther retired from the farm and moved to Melville in 1991.
Esther was a faithful attendee at the Melville Pentecostal Tabernacle, singing in the choir and serving for a time as the Sunday School Superintendent. She fondly remembered the church picnics at Birmingham Lake, later held at Fenwood School, and also her involvement with the Women’s Missionary Council, particularly the Prayer Pal secret gift exchange. Every month she anxiously awaited her new edition of Our Daily Bread.
During mid-life, Esther began to experience a series of health issues, culminating later with restricted, and then a loss of, mobility. Those mobility issues necessitated a move for her and William to Legion Manor in 2008. There she made new friends during the ladies’ morning coffee parties and also in the “puzzle room”. Many hours were spent there trying to get those jigsaw pieces put into place. She was usually up for a game of Chinese checkers, and no matter who took her on, we knew she was always going to be the family champion! Word search also became another favourite, and that book was always open on her table in the nursing home, right up until her last days.
Esther became a resident of St. Paul Lutheran Home on Feb. 3, 2022, and faced her final health trials with courage, strength and without complaint, always greeting family with a big smile when we arrived for our visits. Those smiles have now become treasured memories.
Esther will be remembered lovingly by her husband, William; daughters Ruth Gaura (Wayne) and Gail Hoffman (Wayne); her grandchildren, Stefanie Viczko (Scott), Brandon Hoffman (Mickolene) and Austin Gaura (Ashley); her great-grandchildren, Kallie and Mason Viczko and
William (Liam) Gaura; step-granddaughters Nichole (Lance) and Reagan; sister-in-law Helen Miller; as well as numerous nieces and nephews. She was predeceased by her parents and all her siblings, sister Erna (Fred) Hauser and brothers Otto, Erwin, Walter and Reinhold (Adeline).
Esther lived a very simple life on this earth. We know she is now in the “Mansion Just Over the Hilltop”, where she is free of pain and her trials are no more. Mom, Grandma and Nana – You will never be really gone because you will never be forgotten.
A private family funeral service was held on Friday, July 22, 2022, at Matthews Funeral Home Melville, with Gordon Miller officiating. A tribute was presented by Stefanie Viczko and the pallbearers were Wayne Gaura, Wayne Hoffman, Scott Viczko, Stefanie Viczko, Brandon Hoffman and Austin Gaura. Interment took place in the Melville City Cemetery. For those wishing to do so, donations can be made to the St. Peter’s Hospital Foundation or the St. Paul Lutheran Home Foundation.
Arrangements were entrusted to Matthews Funeral Home, Melville.