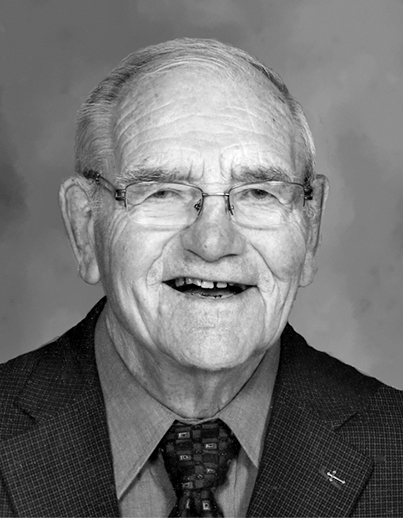 It is with heavy hearts we announce the sudden passing of Herbert Waldbauer, beloved husband, father, grandfather, great-grandfather and friend to many, on Tuesday, June 14, 2022.
Herbert was born Aug. 18, 1926, to Gottfried and Karoline (Markwart) Waldbauer.
In loving memory, Herbert is survived by his beloved wife of 73 years, Elsie; his six children, Darlene Warner, Rosemarie Yahnke (Elmer), Gail Skwark (Lloyd), Nelson Waldbauer (Lorraine), Sheldon Waldbauer (Annette) and Darrel Waldbauer (Sheila); 10 grandchildren; 17 great-grandchildren; and his only remaining sister, Christine Parachoniak. He was predeceased by his father and mother; sisters Mary and Helen; brothers Ernie, Gus, August and Wilfred; son-in-law William Warner; daughter-in-law Lori Waldbauer; as well as many other family and friends throughout the years.
The family would like to thank the staff at St. Peter’s Hospital for their care and compassion during his final hours. In lieu of flowers, donations can be made in his memory to St. Paul’s Lutheran Church or the Heart and Stroke Foundation.
On Monday, June 20, 2022, family and friends gathered at St. Paul’s Lutheran Church, Melville to celebrate the life of Herbert Waldbauer. Ray Yost officiated the service and organist Gaylene Matthews led the congregation in the singing of the hymns. Darrel Waldbauer shared the eulogy and Garrett Waldbauer and Brayden Skwark read the scriptures. The urn bearer was Corwyn Waldbauer. Placement in the Melville City Cemetery Columbarium will take place at a later date.
Arrangements were entrusted to Matthews Funeral Home, Melville.