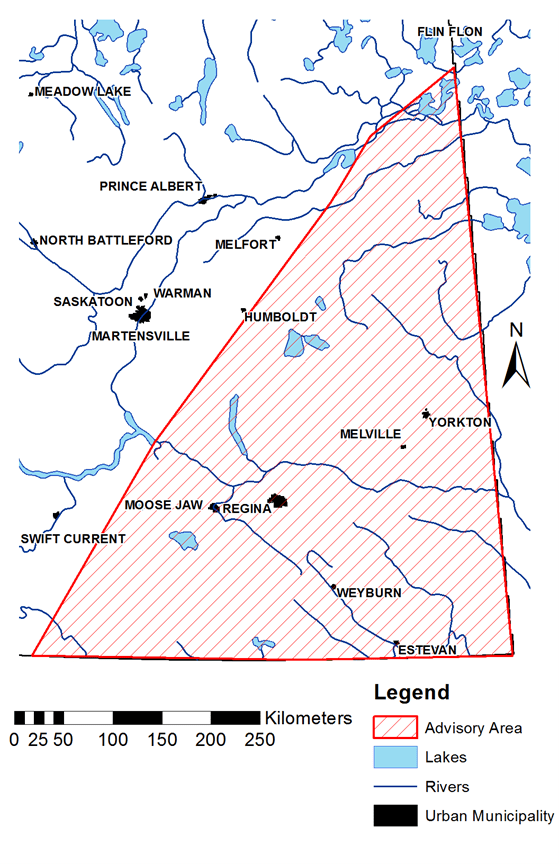 Environment and Climate Change Canada has issued a significant rainfall watch for southeastern Saskatchewan for Thursday May 12 to Saturday May 14, 2022.

Steady rainfall accumulations are forecast to begin Thursday night and drop 40 to 80 millimetres of rain to parts of southeastern Saskatchewan by Saturday. Some areas could receive as much as 90 mm.

Heaviest accumulations are expected to be observed over south-central areas of the province, particularly in the Poplar River Basin near Coronach, eastern portions of the Old Wives Lake Basin near Assiniboia and over Avonlea Creek. With snowmelt runoff complete for this area of the province, the Water Security Agency (WSA) does not expect significant impacts to water flows and levels; however, localized issues are possible where accumulations are highest.

Areas east of Regina from the United States Border to Jan Lake, where conditions have been wetter over the past month, could see increasing flows, potentially to flood levels, particularly on Pipestone Creek, Antler River and tributaries within the Lower Red Deer River Basin near Hudson Bay, including the Fir and Overflowing rivers. The Assiniboine River is still seeing some higher flows after spring runoff; significant precipitation could cause the river to spill over resulting in localized flooding.

The additional rainfall predicted will bring Boundary and Rafferty reservoirs closer to the preferred operating levels for these reservoirs but is not expected to result in their filling. Grant Devine Lake is near full supply and a release will be initiated from Grant Devine Dam on May 12; however, flows are expected to remain in channel on Moose Mountain Creek and Souris River downstream of the dam.

The public should exercise caution around fast-moving water and should not attempt to cross any areas where the depth of water is unknown. Significant rainfall has the potential to result in rapid changes in water levels. WSA also advises that if the spring storm causes power disruptions to local municipal water systems, local drinking water advisories may be issued as required.

WSA will continue to monitor and provide updates to the potential for flooding from this precipitation watch and the runoff across the province as the spring melt continues.