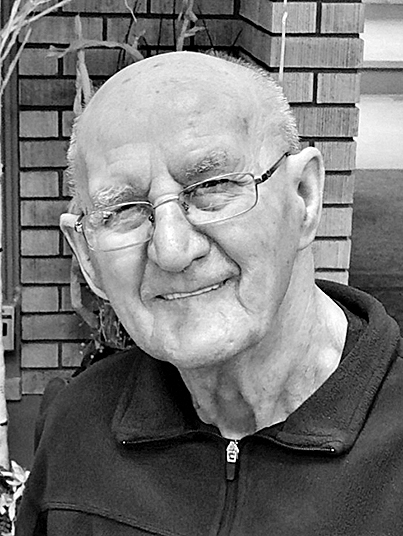 Ferdinand Hack passed away peacefully in his sleep at St. Paul Lutheran Home in Melville, SK, on Friday, Jan. 14, 2022, at the age of 91 years.
Ferd was born to Katherina (nee Temple) and Mattias Hack on Aug. 23, 1930, at the family farm by Duff, SK. He was educated at Lake Mona School and worked on the farm until he married Doreen (nee Graff) on March 31, 1964. Ferd worked for Swift’s Canadian for three years before becoming employed with the City of Melville Public Works in 1966, where he remained until his early retirement in 1983.
Ferd was actively involved in the community, serving for eight years as a volunteer firefighter with the Melville Fire Brigade. He was also an active member of St. Paul’s Lutheran Church, being on various committees, including church council, as a deacon and as the bell ringer until his health deteriorated.
Ferd loved the outdoors, spending hours in his garden and maintaining his yard. He was loved and adored by all his grandchildren, as well as by the children in the neighbourhood. He was a great neighbour who was always willing to lend a helping hand. Ferd spent many an evening playing cards and Aggravation with family and friends. He will be fondly remembered for his pleasant nature and his welcoming smile.
Ferd will be lovingly remembered by his wife of 58 years, Doreen; daughters Noreen (Brent) Stauber, Cheryl (Brad) Churko and Denise Giannakakos; son Brent Hack; special nephew and niece, Garth and Donna Hack; son-in-law Rob (Dixie) Taylor; twelve grandchildren, thirteen great-grandchildren and one great-great-grandchild. He is also survived by his brother, Vern, and numerous nieces, nephews, relatives and close family friends.
Ferd was predeceased by his daughter, Gloria Taylor; his brothers, Albert, Alfred and Joseph; and sisters Elizabeth, Dorathea, Katherine and Christine.
Ferd’s funeral service was held Friday, Jan. 21, 2022, at St. Paul’s Lutheran Church, Melville, with the Rev. Kim Sherwin officiating. The organist, Gaylene Matthews, led in the hymns, “Children of the Heavenly Father”, “Lord, Take My Hand and Lead Me”, “Softly and Tenderly, Jesus is Calling” and “He Leadeth Me”. The scripture lessons were read by Miranda Delorme and Garth Hack, and a tribute to Ferd’s life was presented by long-time friends Carol and Walter Streelasky. All of Ferd’s grandchildren were considered honorary pallbearers, and the active pallbearers were Garth Hack, Gary Taylor, Joshua Stauber, Scott Churko, Derek Churko and Panagiotis Giannakakos. Interment took place in the Melville City Cemetery.
Arrangements were entrusted to Matthews Funeral Home, Melville.