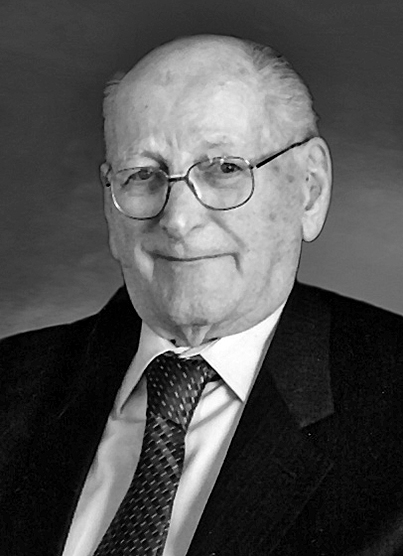 Doug McKee passed away on Tuesday, Oct. 19, 2021, at the age of 93 years, at St. Paul Lutheran Home in Melville, SK.
Douglas was born on Dec. 13, 1927, to Rhoda and Thomas McKee in Wakopa, MB. He grew up and took all of his schooling in Sandy Lake, MB, along with three sisters and three brothers. He enlisted in the Canadian Army in 1944 at the age of 17 years at a time when his father and three brothers were also enlisted.
After discharge, Doug followed his parents to the Neepawa area of Manitoba and hired on with the Canadian National Railway. Shortly after moving to the area, he met a young school teacher, Thelma Whelpton, whom he married on July 17, 1948. They resided in Neepawa for a few years until his railway job required a move to Melville in 1951. Doug and Thelma had two children, Wayne and Barbara, both born in Neepawa and raised in Melville. Doug always supported the activities of his children and instilled in them a desire to better themselves, get out and see the world, and maintain close family ties.
Doug was an active, community-minded resident of Melville for close to 70 years, and he volunteered with a number of organizations, many in partnership with Thelma. These included: railway union representative, United Church elder, church youth group, Melville Figure Skating Club, minor sports coach, University of Regina Board of Governors, Saskatchewan Grain Car director and political campaign organizer. He was always known as an energetic, reliable, compassionate and outspoken individual who could separate the “wheat from the chaff” and then willingly stand up and make his views known. He believed strongly that institutions, including the government, were put in place first and foremost to serve and support people.
Doug retired from the railway in 1982 after 35 years of riding the rails and was proud that he lived long enough to earn a pension for more years than he worked. During their retirement, Doug and Thelma travelled back and forth across Canada many times to visit with their three grandchildren. They left their grandchildren with strong, lasting memories of wonderful and caring grandparents. Doug was distraught by the passing of Thelma in 2005 after being married for 56 years.
On Jan. 28, 2006, Doug and Ruby Turton were married in Melville and were pleased to be able to link their families. Doug was always grateful for being welcomed wholeheartedly into Ruby’s loving family. He and Ruby travelled many times to celebrate significant events such as additions to the family. They enjoyed living in Melville’s Caleb Village for a number of years before it was necessary for Doug to move to St. Paul Lutheran Home. He received loving care from Ruby and her family through many ups and downs in his condition.
Doug is survived by his wife, Ruby; his children, Wayne McKee (Diane) and Barbara Malcomson (Harold); his grandchildren, Jacqueline Pelletier (Michel), James McKee (Megan) and Mitchell Malcomson (Jess); four great-granddaughters; and the Turton family, including Ruby’s sons and daughters, grandchildren and great-grandchildren.
A service was held for immediate family at Matthews Funeral Home on Monday, Oct. 25, 2021, with the Rev. Brian Mee officiating. The eulogy was presented by Dale Turton, and the urn bearer was Wayne McKee. Organist Gaylene Matthews led in the hymns, “Amazing Grace” and “In the Garden”. Interment followed in Riverside Cemetery, Neepawa, MB, with Deacon Wesley Turton presiding.
Arrangements were entrusted to Matthews Funeral Home, Melville.