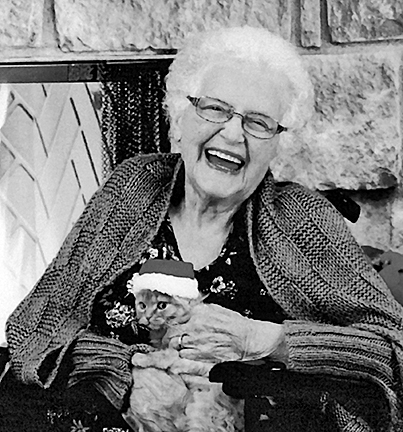 Rose Farkas of Wawota and formerly of Whitewood, passed away peacefully on Monday, Oct. 4, 2021 at the age of 94 years. Rose Marie was born on Jan. 16, 1927, on the family farm north of Burrows (17-16-1-2) to August and Elizabeth (nee Dorocki) Domoslai. She had three sisters and seven brothers.
Rose worked at several restaurants around Whitewood. She also worked for her brother-in-law at the Cecil Café in Kenora, Ont. She married the love of her life, Laddie Farkas, on June 21, 1949. They lived all their married life of 59 years in Whitewood. Rose worked at Truman’s Locker Plant, Red & White Store and Solo Store.
Laddie had a serious stroke in 1990. Rose took care of him for seven years at home. In 1999, Laddie went to the Whitewood nursing home. Rose went to see him every day, where she was known for her amazing smile.
Rose’s next home was Maryfield Villa, where she enjoyed her stay. She moved into the Wawota Deer View Lodge in 2015, where she lived until her passing. She loved that her family and the nursing home family were close. Rose’s pride and joy were her children, then her grandchildren and then great-grandchildren.
Rose was predeceased by her parents, August and Elizabeth (nee Dorocki) Domoslai; Laddie Farkas, her loving husband of 59 years; three sisters, Alice (Roland) Kershaw, Erma (Ham) Wong and Gladys (Wilfred) Stromgren; four brothers, Frank (Irma), Gus (Anne), Laddie and Tony and sister-in-law Eva Domoslai; daughter-in-law Elaine; and niece Darlene Malaryk. She leaves to cherish her memory: her children, Brian of Hopewell, Virginia, Judy (Don) Steinke of Wawota, Nancy McFadyen of Calgary and Randy (Joan) of Calgary. She also leaves five grandchildren, Trent (Tracy), Kristen (Shawn), Kyle, Madison and Jacob; and five great-grandchildren, Sierra, Rowan, Chesney, Ashley and Hailey. Three brothers also mourn her loss, Andy, Emile and Albert, as well as many nieces, nephews and other relatives.
What we learned from Rose was to always SMILE and be a ray of sunshine to everyone. Thanks a Million!
Mass of Christian Burial was celebrated for Rose on Thursday, Oct. 14, 2021, at St. Joseph’s Roman Catholic Church, Whitewood, with the Rev. Fr. Tomy Mandapathil celebrating. The music was provided by Dianne and Ernie Veresh, along with choir members. The readings were by Nancy McFadyen, and Sierra Murray led the intercessions. The offertory gifts were presented by Sierra, Rowan and Chesney Murray, and Trent Steinke delivered the eulogy. Interment followed in the Whitewood Cemetery with Ron Farkas, Trent Steinke, Kristen Murray, Sierra Murray, Jacob Farkas and Joe Domoslai acting as pallbearers. To leave a message of condolence or to make a memorial donation, please visit matthewsfuneralhome.ca
Arrangements were entrusted to Matthews Funeral Home, Whitewood and Melville.