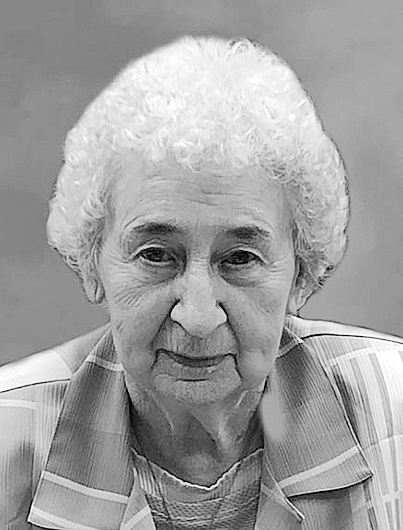 It is with sorrow that the family of Eleanor Niebergall announces her passing on Friday, Feb. 12, 2021, at the age of 89 years.
Eleanor Barbara Maurer was born on July 9, 1931, to Fred and Barbara (nee Bauer) Maurer on the family farm in the Neudorf district of Saskatchewan. She was baptized on July 12, 1931, in the Lutheran faith. She later confirmed her faith at St. Peter’s Lutheran Church, Duff, SK.
The family moved to the Duff district of Saskatchewan in 1932. Eleanor attended Colmer School and then continued her schooling at Duff. She started work at Bokay Florists in 1959. In 1962 she began working for the Melville Medical Association until her retirement in 1995.
Eleanor married Ervin Niebergall on May 25, 1974, at St. Paul’s Lutheran Church, Melville, SK. Together they found great pleasure in travelling. Ervin and Eleanor travelled throughout Canada and most of the United States, while also making trips abroad. Eleanor also spent a lot of time, and took great pride, in both her vegetable and flower gardens. She always had enough produce to give to family and friends.
In 2017 Eleanor’s health deteriorated, resulting in her requiring long-term care. She spent a short time in the Gateway Lodge in Canora, SK, and then transferred to St. Paul Lutheran Home in Melville. Eleanor enjoyed all the activities and entertainment provided by the nursing home. Prior to and while she was in the nursing home, church services were very important to her. She looked forward to visits with other family and friends and especially “the little ones”. She entered her eternal rest on Friday, Feb. 12 with family by her side.
Eleanor was predeceased by her husband, Ervin, in 2004; her parents, Fred and Barbara; two brothers-in-law, Elmer Lang and Bert Horgas; nephew Richard Horgas and niece Janice Mehling. She was also predeceased by Ervin’s parents, Peter and Matilda Niebergall, and his siblings and their spouses: Caroline Niebergall, Mary (Albert) Rosen, Edith (Richard) Sitz, Barbara (John) Potyondi and Ernest (Agnes) Niebergall. She is survived by her three sisters, Louise (Gilbert) Lang of Yorkton, Esther Horgas of Yorkton and Alvina Lang of Melville; numerous nieces and
nephews, great-nieces and -nephews, and great-great-nieces and -nephews.
We thank all her family and friends for keeping in touch with her over the years, both far and near. To the nursing home staff on Academy Road where she lived, thank you for providing care and comfort when she needed it. Thank you to the activity department and spiritual care for the activities and services that she was able to attend. Thank you to Pastor Phil at the nursing home, Pastor Kim for leading the funeral service, the staff at St. Paul’s Lutheran Church, and Matthews Funeral Home.
Eleanor was blessed to have many family members and friends in her life; she will be missed by all.
A private family funeral service for Eleanor was held on Thursday, Feb. 18, 2021, at St. Paul’s Lutheran Church, Melville, with the Rev. Kim Sherwin officiating. Interment took place in the Melville City Cemetery with Dave Lang, Keith Lang, Glenn Lang, Garrett Lang, Robert Horgas and Carson Sass acting as pallbearers.
Arrangements were entrusted to Matthews Funeral Home, Melville and Whitewood.