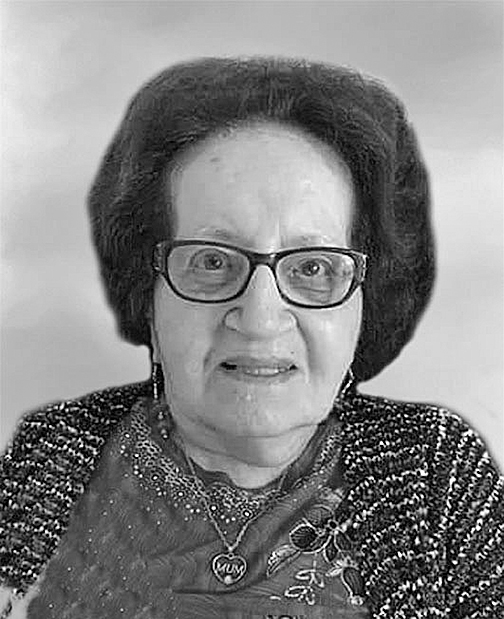 It is with great sadness that the family of Wilhelmine “Gladys” McDade (nee Gross) announces her passing at St. Paul Lutheran Home in Melville, SK, on Friday, Feb. 12, 2021, at the age of 90 years.
Gladys was born on April 5, 1930, at Earl Grey, SK, to Bertha and George Gross. She attended Sweet Hill School. Gladys met her future husband at the age of 13 years at a school dance. They attended a box social, where Bill bought Gladys’ box lunch so that they could spend time together. They were united in marriage in Watrous, SK, on Oct. 25, 1952. The couple farmed for two years in the Simpson district, welcoming a son, George Alexander, in 1953. The small family moved to Simpson in 1954, where Bill started working as a mechanic. They welcomed a daughter, Valerie Jean, in 1957. The family then moved to Watrous in 1962, where Gladys worked as a cook for the Manitou Mineral Spa, and Bill continued to work as a mechanic. The family moved to Melville, SK, in 1969, where they settled for the remainder of their lives.
Bill worked as a mechanic, eventually having the opportunity to work as the head mechanic for the Deer Park School Division. Gladys worked in the kitchen at St. Paul Lutheran Home for one year. She then decided to open a foster home in 1971 with Bill, where they served children and some adults with intellectual disabilities, as well as others who were in a time of need. Bill continued to work as a mechanic while also helping Gladys with the foster home.
Gladys had a servant’s heart and wanted to help others in need. She cared for many people over the years, about 100 in total. At one time, they took care of 12 people at once but usually had 6 people in their home at one time. Gladys was always there for people in need and never made anyone feel less of themselves for asking for help. Some of the people who stayed in their home stayed for months, some for years. Their home was a place of refuge where foster children were loved like family. Gladys and Bill were foster parents for decades until the passing of Bill in 1987, after which Gladys continued until she had health issues at the end of 2002. She ran the foster home for 31 years in total. To this day, foster children and people who stayed at her house were still in contact with Gladys, which is a testament to the positive impact that she had on so many lives.
Gladys spent her remaining years at St. Paul Lutheran Home, where she continued her ministry of helping others. She always helped the staff and residents as she was able. Gladys enjoyed the activities at the nursing home, including dances, adopt-a-grandparent, bingo, bowling and musical performances. She also enjoyed many visits with family and friends over the years during her stay at the nursing home. The staff loved her like family, as did Dr. Eshawesh, who cared for her for decades.
Gladys will be lovingly remembered by her children, George (Betty) and Valerie (Dennis); her brother, Ervin (Carol); sisters-in-law Doreen and Nancy; her grandchildren, Raquel, Carlene (Lloyd), Derek, Crystal (Brian), Terence (Dee-Anna), Joseph, Melissa (Darryl) and Paige; numerous great-grandchildren; two great-great-grandchildren; and numerous nephews and nieces, foster children, foster family members and friends. Gladys was predeceased by her parents, Bertha and George Gross; her loving husband, William (Bill); sister Annie (Bernie); brothers Sigfried (Frieda), Alfred and Edward (Lois); brothers-in-law Robert (Shirley) and James; and her best friend, Edith (Harold).
A funeral service was held for Gladys on Saturday, Feb. 20, 2021, at Matthews Funeral Home, Melville, with Pastor Tim Oehler and the Rev. Dave Taylor officiating. Soloist Carlene Schwartz sang “Amazing Grace” and “How Great Thou Art” accompanied by Gaylene Matthews. Several tributes to Gladys were presented by family members. Interment took place in the Melville City Cemetery with Dennis Exner, George McDade, Randy Gross, Terence McDade, Brian Garrett and Lloyd Schwartz acting as pallbearers.
Arrangements were entrusted to Matthews Funeral Home Melville and Whitewood.