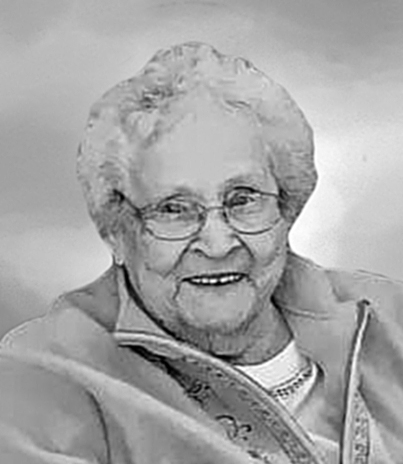 Hedwig (Heddie) Florence Speidelsbach was born March 26, 1926, to Philip and Maria Zorn in Oakshela, Sask. She attended school in the one-room schoolhouse in Oakshela until Grade 8. Being one of the eldest children, Heddie was responsible for chores and helping out around the farm, including working in the field with horses.
During WWII, Heddie was a hired hand for farmers around the area because many of the sons were gone to war. During this time, she wrote many letters to Pete and others from the Oakshela area who were overseas. Upon Pete’s return from overseas, he and Heddie were married on March 24, 1946. Shortly after that, they moved to Creston, BC, where Heddie worked long, hard days in the flats and later at a local cafe. In February of 1947 their first son, Alvin, was born. Not long after Alvin’s birth, they made the big move back to Saskatchewan, where they took up farming south of Oakshela. Their second son, Wayne, was born in November 1949.
Heddie loved her vegetable and flower gardens and canning and preserving her harvest for the family, but her favourite job was to be Pete’s right-hand man, whether it be tending to the cattle or working in the field. In January of 1960, they welcomed their daughter, Marilyn, to the family.
Pete and Heddie continued to farm until Pete’s health forced them to retire to Grenfell in 1977. Heddie still had her large garden but now had time to add things like knitting and crocheting, helping out the Legion ladies and going camping and fishing with family and friends. Being Pete’s right-hand man didn’t change though; now it just included carpentry and handing him things before he even knew he needed them. And, of course, we can’t forget the almost revolving door to her kitchen, where everyone was welcome to stop for a coffee and a piece of cake or cookies she had baked.
After Pete’s passing in 2003, Heddie decided to move into a seniors’ unit until she didn’t feel comfortable being on her own any longer. She then moved to Wolseley Lakeside Home, where she remained until her passing on Saturday, Jan. 9, 2021.
Heddie was predeceased by her husband, Peter, and her son, Wayne. She is survived by her son, Alvin (Carol) Speidelsbach of Grenfell and their two sons: Kevin (Tamara) Speidelsbach of Grenfell, Tyler (Mandy), Mia and William Speidelsbach of Herbert, Jesslynn (Jason) and Joel Ravndahl of Birch Hills, and Kailee (Dylan) Bachelu of Francis; Bradley (Tanya) Speidelsbach of Grenfell, Jordyn Speidelsbach (friend Shaine Delorme) of Moose Jaw and Keegan Speidelsbach of Grenfell; one daughter-in-law, Brenda Speidelsbach and her children, Devon (Lisa) Lainey and Danika Speidelsbach of Regina, Marnie (Colin) and Daxen Levesque of Regina and their half-sister, Jami Johnson, Kasey and Ashley of Penticton, BC; one daughter, Marilyn (Rick) Diacon of Moose Jaw and her son, Benjamin Hoffman.
A private family funeral service took place on Saturday, Jan. 16, 2021, at Grenfell Apostolic Church with the Rev. David Wicks officiating. Several family members shared their memories of Heddie, and Rick Diacon sang “How Great Thou Art” as a tribute. Interment took place at Oakshela Cemetery with Kevin Speidelsbach, Bradley Speidelsbach, Devon Speidelsbach, Marnie Levesque, Tyler Speidelsbach and Keegan Speidelsbach as pallbearers.
Arrangements were entrusted to Matthews Funeral Home, Melville and Whitewood.