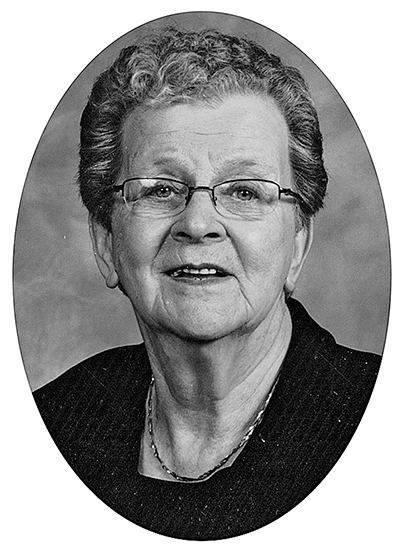 Sophie Kozakewich of Regina, and formerly of Fenwood and Melville, widow of the late Alex Kozakewich. Sophie entered her eternal rest on Saturday, Sept. 26, 2020 at the Pasqua Hospital in Regina at the age of 92 years.
Sophie was born July 4, 1928, the daughter of Tom and Dora Ogryzlo (Terelsky). Ten siblings: Katie, Walter, Olga, Ann, Helen, Sophie, John, Mary and deceased as infants, Peter and Michael.
In 1937 the farm was struck with a tornado tearing the roof off the house, sister Olga passing away in the same year at the age of 20, four years later father Tom at age of 56, and later Walter at age of 48. The remaining siblings had developed a very strong bond always looking out for each other. When brother John and Jackie visited from Calgary all the sisters would smother him with love. Sister Mary Schick and niece Eileen Ballman continued to show the family love and were constant visitors with Sophie from the time she moved into Regina on Nov.2, 2011, always bringing great conversation to go with their card games.
Sophie attended Halech School and later in life moved to Saskatoon where she worked at Mother’s Bakery. After being in Saskatoon for three and one half years, Sophie decided to move back home to work for her sister, Ann and Mike Cherneski. It was during this time that she met her husband of 49 years, Alex Kozakewich and was united in marriage on July 19, 1953. After their wedding they resided with Alex’s parents, Nick and Nancy Kozakewich, for the next nine years. In April 1962 they moved to the Ogryzlo homestead after purchasing it from mother Dora. Sophie and Alex enjoyed the farm and were forever grateful to their neighbors and relatives for their help during the times when Alex was ill and unable to carry out every day farm work. Mom enjoyed cooking on her wood stove and was known for her homemade bread and buns, chocolate cake, cinnamon buns, perogies, donuts and the best food you have tasted. Many winter evenings were filled with kaiser or canasta games with sister, Katie and Mike Kozakewich, neighbours or friends and always lunch before they left. Christmas and Easter was always made with traditional dishes which mom made with pride. On Jan. 25, 1997 they retired to Melville to their home on Manitoba Street. Sophie was excited to join the Melville Quilters Guild, especially proud of their spring show. Every winter she started a new quilt which was entirely hand stitched and made a quilt for each of her children and grandchildren. When sister, Helen and Paul Greva, moved to Melville only blocks away, mom was ecstatic as it allowed them to visit at least twice a day which she especially appreciated when Alex passed in 2002.
Sophie leaves to cherish her memory:
Son, Randy (Carol) Kozakewich; grandson Jaeson (Bree), great-granddaughters, Harper and Saylor; grandson Lyndon (Jenna), great-grandchildren, Sedona and Copper; grandson Bradly (Stacey), great-grandchildren, Austin and Acadia. Many family memories were made on the farm with Baba as well as the lake. Baba and Geido enjoyed the time spent with Randy, Carol and the boys to the Maritimes and the B.C. coast.
Son, Ivan Kozakewich. Mom’s travelling partner and companion which mom was always a willing participant. One of their favourite trips was the two of them in a motorhome travelling down mom’s memory lane. Starting in Saskatoon with a visit to Mother’s Bakery, her home that she stayed in while in Saskatoon and visiting girl friends from her childhood in Saskatoon, Edmonton, Calgary and Moose Jaw. An extra special memory was the Alaskan cruise they took for mom’s 80th birthday.
Daughter, Amelia (Bruce) Derkach; grandson Derek and Kim Derkach; grandson Brett (Celeste) Derkach, great-grandsons, Arlo, Brixton and Ezra; granddaughter, Kelsey Derkach. Baba loved coming to watch her grandchildren do Ukrainian dance and never missed a concert, attending every ball game and hockey game that she was able to. There was always a care package that she sent home with her grandchildren after the game filled with food and baking.
Sister, Mary (Ray) Schick. Sophie loved sharing her birthday with Mary and thought it was extra special that they had daughters who also shared birthdays. “How much better can it be”
Sister-in-laws, Jackie Ogryzlo, Katie Sawchyn, Helen Sawchyn, Maria Stecyk, Sophie Kozakevich.
The funeral service was held on Friday, Oct. 2, 2020 at 3 p.m. from the Holy Ghost Ukrainian Orthodox Church in Goodeve with the graveside service and interment following at 4 p.m. from the Holy Ghost Parish Cemetery.
Arrangements were by Bailey’s Funeral Home, Melville.