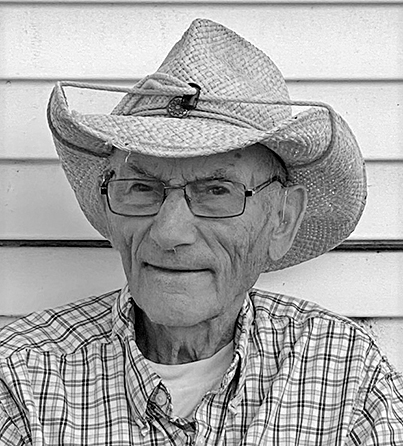 Andrew Domoslai saw the dawn of 2023, then quietly slipped away later in the morning of Sunday, Jan. 1, 2023, at the Whitewood Community Health Centre.
Andrew was born in 1925 to August and Elizabeth Domoslai on the farm near Burrows, one of eleven children. He remained rooted to that ground and rarely left it in the early years.
Andrew married Eva Kondor in 1958 and set to work raising seven sons, teaching them the ways of the land and cattle. His cattle were always his joy, and he carefully tended his herd and sought to always improve its quality. Through artificial insemination, he transformed a largely HerefordX herd into a small herd of registered Limousin cattle. His sons were encouraged in 4H and always expected to work as he did. The cows came first to the supper table, and work wasn’t done until the stock were tucked away and happy. Andrew loved his country music, singing along and recording all his favourites. He read and kept a daily journal recording the ebb and flow of his life.
In 1995 Eva and Andy moved to Whitewood, although Andy continued to help Chris and Bill around the farm as best he could. He was devoted to St. Joseph’s Roman Catholic Church, singing in the choir as long as he could as well as being a proud member of the Knights of Columbus. During his retirement, Andy loved his visits with friends on coffee row. He also enjoyed sweeping and throwing rocks at the curling rink and building and hanging birdhouses throughout the countryside.
Eva passed away in 2015, but Andy was able to stay at home thanks to support from his sons, notably Joe, who moved home to tend to him. His last year was spent at the Whitewood Community Health Centre where he was well cared for. Andrew’s mind and memory were sharp to the end. Just a short month ago, he celebrated his 97th birthday with a steak at Ponchos Bar and Grill in Whitewood.
Andrew now leaves a large family to miss and remember him including: Joe (Whitewood), Chris (Whitewood), Ken and Kim (Moose Jaw), Bill and Elizabeth (Whitewood), Harvey and Lisa (Saskatoon), Roy (Saskatoon), and Peter and Judy (Calgary); grandchildren Tasha (Duncan), Lauri, Kenton (Ashley), Kayla, Wyatt, Kyla (Mitchell), Ryan, Amy and Abby; great-grandchildren Sonja, Brooklyn, Zeus, Zoey, Jaxtyn and Logan. Andrew’s only remaining sibling is Emile, who lives in Vancouver. Tony, Gus , Frank, Alice, Rose, Erma, Gladys, Albert and Laddie are already at their Heavenly Home.
Mass of Christian Burial was held on Friday, Jan.,13, 2023, at St. Joseph’s Roman Catholic Church, Whitewood, with the Rev. Fr. Tomy Mandapathil officiating. The hymns were led by the St. Joseph’s Choir, Judy Cudrak and Abby Domoslai read the scripture readings and Harvey Domoslai delivered the eulogy. Joe Domoslai, Chris Domoslai, Ken Domoslai, Bill Domoslai, Harvey Domoslai, Roy Domoslai and Peter Domoslai were honorary bearers while Kyla Morin was the urn bearer. Interment will take place in the Whitewood Cemetery at a later date.
Funeral arrangements were entrusted to Matthews Funeral Home, Whitewood and Melville.