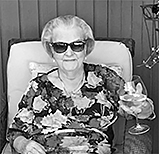 Our beloved mother, grandmother, great- grandmother, sister, aunt and friend, Esther Pilon, went to her Heavenly home on Friday, Jan. 13, 2023, at the age of 98 years at St. Paul’s Palliative Care Unit, Saskatoon, SK.
Esther is survived by her children, Allan (Laura) Pilon, Gordon (Marjorie) Pilon, Ruth Graff and Leona (Wayne) Kondel; grandchildren Ryan (Randi) Pilon, Angela Kendall (Matt Hunter), Ross, Scott and Todd Pilon, Kelsey Simmons (Steve), Kennedy Graff, Brennan Kondel and Dane Kondel (Teagan Witko); great-grandchildren Ainsley and Bastian Pilon; sister Janice (Bob) Honeycombe; brother-in-law Stan Wheeler and sister-in-law Irene Pilon; as well as several nieces, nephews and friends. She was predeceased by her husband, Leo Pilon; son-in-law Terry Graff; parents William and Sarah McLaughlin; brother Johnnie McLaughlin; sisters Betty, May, Nan, Morag and Isobel; as well as several sisters- and brothers-in-law.
Esther was born on July 18, 1924, in Johnstone, Scotland, and this is where she received her education. Esther was employed as a nurses’ aide at the Thornhill Maternity Hospital in Johnstone. Along with her brother Johnny, in August 1948 they came to Melville to meet Esther’s long-time pen pal, Kay. There Esther met her soul mate, Leo Pilon, and immigrated to Canada in May of 1953. They were married on Oct. 14, 1953, at St. Henry’s Roman Catholic Church in Melville.
Esther was an exceptional homemaker, raising her four children, guiding them with a strong work ethic. Many family vacations involved time at the lake and Shuswap houseboat vacations, where she rode on a Sea-Doo in her 80s. Esther loved travelling, knitting, needlework, music, gardening and volunteering. She enjoyed bowling and was in a league until age 90. Most important to her was spending time with family and friends and her involvement with St. Henry’s Parish as a Eucharistic Minister, marriage counsellor and active member of the CWL. After Leo died, she courageously obtained her driver’s license at the age of 75. She remained in the family home until 2012, when she moved to Saskatoon to be closer to her children.
And when it’s time for you to go
From that body to be free,
Remember you’re not going,
You’re coming here to me.
Mass of Christian Burial will be celebrated for Esther at St. Henry’s Roman Catholic Church, Melville, on Saturday, Jan. 21, 2023, at 11:00 a.m. Interment will take place in St. Henry’s Parish Cemetery. Donations may be made in Esther’s name to: ESK-OMI Missions, P.O. Box 159, St. Norbert, MB, R3V 1L6
Arrangements are entrusted to Matthews Funeral Home, Melville.