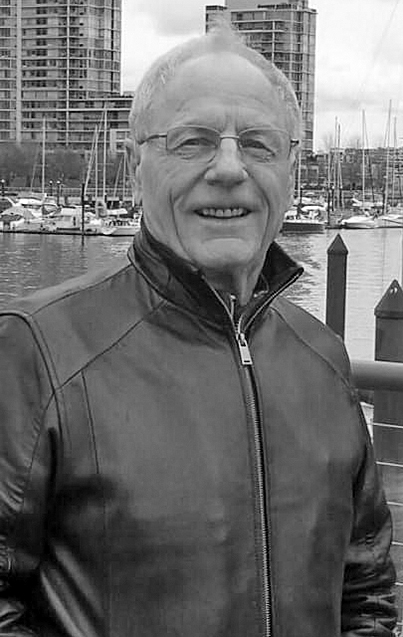 Calvin was born in Edenwold, Sask. and passed peacefully in Parksville, B.C. with his family by his side. In his younger days, Cal was an avid angler and hunter (too many lakes in northern Saskatchewan and Manitoba to name), and he enjoyed travelling to Mexico, California and Arizona in his later years. Dad was the best kind of sports fan as he stayed on the bandwagon no matter how the Blue Jays, Canucks and Saskatchewan Roughriders’ season was going. Dad’s love for all genres of art and music, enlightening conversations, and being outdoors in the sunshine were likely due to his grandfather Joseph’s influence, who was one of dad’s heroes. Dad was ever an optimist and was always able to see a spark of potential in people, projects, and ideas. “I like to think my glass is half full.” was one of his familiar sayings.
Dad had fond memories of attending Luther College in Regina, Montana State University and the University of Saskatchewan. His passion for sports led him to attend a Grey Cup Game, where he met Colleen, whom he would marry, and together they would raise three children. Returning to the Fort Qu’Appelle Valley area, Dad farmed grain and livestock and owned the local butcher shop producing award-winning products at provincial competitions. As a business owner in Fort Qu’Appelle, Dad took part in local politics, the Chamber of Commerce and the Rotary Club. He was an active volunteer helping organize the very popular Fort Winter Festival and was also involved in establishing the Mission Ridge Winter Park. Not only was Dad an involved young businessperson, he also physically worked the farm as his family had done for generations. His oldest son has fond memories of trying to spot where he was in the fields by looking for the cloud of dust. His youngest son treasures the early days of fishing Echo Lake from the family cottage, and duck hunting at the farm. His only daughter treasures the memories of fun family ball games at the cottage, learning how to swim in Echo Lake and the Mohl family double decker pontoon boat rides.
After several summer vacations to “the Island”, Cal moved his young family to Parksville, B.C. in 1979, where he continued his entrepreneurial activities. Cal built and sold residential satellite dishes long before they were common, he operated a vending machine business servicing a large territory in B.C., and a restaurant in Sidney. He supported his kids in their sports and spoke fondly of his time playing hockey as an “old timer” and a fundraiser his team did that involved building a local home. Never to do something halfway, dad installed a swimming pool in the backyard and built the deck from the lumber he milled off his property in Coombs. Dad moved to Tofino in the mid-90s, where he operated a guesthouse and partnered with his youngest son to open a Fly and Tackle Shop and fishing charter operation. Dad retired to Sidney and later moved to White Rock and Kelowna, before returning to the island. In each community, dad spent time pursuing health and fitness and enjoyed going to the gym, walking and swimming. Dad’s unwavering encouragement for his children and grandchildren to pursue their dreams and passions will never be forgotten.
Calvin is predeceased by his parents, Fred and Helen; and nephew, Jeff Donison. Cal is lovingly honoured and remembered by his brother, Del (Louise); sisters, Linda (Buryl) and Marilyn (Ron); sons, Darren and Jason (Lorrie); daughter Mahalia (Melany Dawn); his treasured grandchildren:, Ben (Taiya), Jenna and Trevor; as well as his best bud, Rick. Special appreciation goes out to Dr. Hunter and her supportive palliative care team. A celebration of life will be announced at a later date.