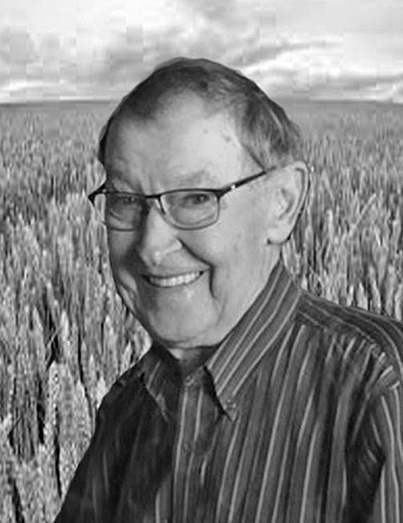 Edward Beutler was born May 19, 1940, to Adolph and Alma (Ikert) Beutler. He had two brothers, Adolph and Leo, and a sister, Irene. They lived on various farms in the Whitewood area over the years until Dad bought the Warner Currie farm, four miles east of Whitewood, after graduating from high school. Dad worked at the Whitewood Herald Print Shop during high school and during the early years of his marriage when they were establishing the farm. He married Marlene Abel on June 15, 1963, at the Evangelical Church in Wapella, and together they raised three children.
Dad was not a large man, but he more than made up for it with his determination, hard work and energy to keep going long after everyone else was tired. He started a new career in addition to farming at a time when many people start their retirement, becoming a real estate agent selling farmland for Lane Realty; he had this career for many years after the age of 62.
Dad was always quick on his feet; he loved to race the grandchildren in running races and always won. He had a unique sense of humor that the grandchildren especially enjoyed.
Farming meant everything to dad, and we could not get him to leave the farm and retire. When mom was sick earlier this year, they were away from the farm for several months in a personal care home, but dad missed the farm; they moved back at the end of October of this year. Unfortunately, he became ill shortly afterward and was taken to Kipling Integrated Health Centre, then airlifted by STARS to ICU at the Regina General Hospital, where he would later pass away.
Dad was unwavering in his belief in the Lord Jesus Christ and was an example of the Christian faith to all who knew him. We have peace knowing that he is in Heaven with our relatives who have passed before him.
Edward is survived by his wife, Marlene; daughters Diana (Darcy) and Janice (Rob); son Jason (Tammy); grandchildren Xanthe (Tyrone), Chantara (Reid), Maddie, Eric, Alex and Nathan; great-grandson Will; and sister Irene (Vince) Marchak.
Ed’s funeral service was held on Thursday, Dec. 1, 2022, at the Whitewood Evangelical Missionary Church with the Rev. James Graham and Pastor John Graff officiating.
Nathan Beutler read scripture, Alex Beutler gave the eulogy, Xanthe Lerner, Chantara Lerner and Maddie Schuster presented a poem and a tribute, and Alex Beutler and Diana Ashfield performed special music. Interment took place at the Whitewood Cemetery, Whitewood, SK, with Alex Beutler, Nathan Beutler, Reid Basnicki, Eric Schuster, Brent Murray and Wayne Beutler acting as pallbearers.
Arrangements were entrusted to Matthews Funeral Home, Whitewood and Melville.