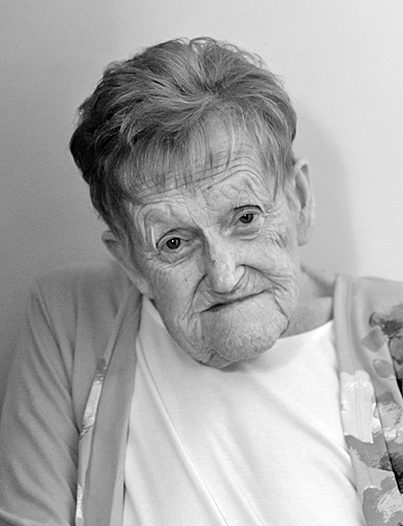 Clara Hilliar was born on Dec. 16,1939, at Fenwood, SK. She was the middle daughter of Bert and Mary Mclellan. She departed this life on Friday, Nov. 25, 2022, at the age of 82 years, at the Country Meadows Lodge in Yorkton, SK.
Clara was predeceased by her parents, Bert and Mary Mclellan; her daughter, Geraldine, in infancy; her grandson, Dwayne; son-in-law Norman Walker; her sister, Pat Fletcher; her sisters-in-law, Muriel and Irena Korinetz and Margie Garner; her brothers-in-law, Arnold Fletcher, Earl and Joe Hilliar, John and Joe Korinetz, Gill Garner, Ed Zutz and George Muirhead; nephew Kelvin Korinetz; plus numerous aunts and uncles.
Clara leaves behind to cherish her memory: her husband of 61 years, Alex Hilliar; her two daughters, Sandra Walker (Ernie) of Fenwood, SK, and Shirley (Herb) Lemaire of Melville; her nine grandchildren, Kim Walker of Yorkton, Linda (Chad) Anhalt of Yorkton, Joanna (Kenny) Martin of Rhein, Herbert and Johnny Walker of Fenwood, Frank (Amanda) Walker of Fenwood, Matthew (Allicia) Walker of Melville, Travis (Lanina) Lemaire of Melville, and Lindsey (Harley) Hahn of Melville; her eleven great-grandchildren, Kendra and Trinity Walker, Andrew, Jesse and Tanner Anhalt, Tyler, Jeremy, Ashley and Aspen Martin, and Elizabeth and Maddison Walker; her sister, Gladys Mclellan, of Yorkton; plus extended family members, including nieces, nephews and cousins.
Clara grew up on the family homestead near Homefield, SK. She took her education at the Smokeside Country School up until Grade 9, when she quit school to help her mom and dad on the family farm. In the fall of 1960, a young gentleman (Alex) came to buy some replacement heifers from Clara’s dad; not only did he buy the heifers, he spotted a young lady named Clara. On Feb. 11, 1961, Clara married Alex Hilliar, and soon after that, they took over the family farm.
Clara enjoyed the farm and worked very hard; there was never anything she was scared to tackle, from pitching bales, hauling and loading grain and milking 18 cows by hand to feeding cattle, pigs, chickens, ducks, geese and horses; she did it all. From milking cows, she would ship cream; as young kids, every time we would take cream into Yorkton or the Melville Creamery, there was a treat on the way home, a box of Revellos or Fudgesicles, and she would say, “Hurry and eat them before they melt”. Mom made homemade cottage cheese, which she never did eat. Butter was churned by hand, and Herb remembers this very well; before taking Shirley out on a date, the butter had to be churned so mom could make it into one-pound blocks.
In 1989 Clara retired from milking cows and sold the milk cows but always had something else to do. She always said her peaceful place was working in her large garden. Clara spent countless hours canning fruit, making pickles and canning vegetables.
Clara loved company and always had lots of food and a cup of tea or something stronger; you would nevergo away hungry. She babysat the Ivanochko kids, Gerald, Clifford, John and Christal, and always said that was her adopted family. She enjoyed her grandchildren and great-grandchildren; she showed them how to plant peas and corn in the garden and how to grow the biggest pumpkins. Making homemade bread or baking cookies and icing them was so much fun with grandma.
As her health started to fail, Clara loved the company of the neighbours – Brian Schmidt would come over countless times for water and would stop in and have a visit with Clara; the cowboys, like Ben and Nick, would stop in for a drink; or Daryl and Melanie would bring strawberries and have a little visit.
In 2021 Clara had a hard time taking care of herself and spent a few months staying with Herb and Shirley in Melville. She enjoyed Herb’s cooking when Shirley was at work, watching television programs, The Waltons and Heartland, or she would listen to the Saturday night get-together.
On Aug. 2, 2021, Clara and Alex moved off the farm to Caleb Village in Melville. As her health continued to fail, Clara was never settled; she missed the farm. The last few months were the hardest. Mom enjoyed Sandra and Dad coming on the weekend and having a visit. The happy days were when Linda would bring Lassie in to see her; Mom would feed her treats and share some cheese sticks. She enjoyed her sister Gladys coming up in the evenings and getting her settled in for the night. Mom enjoyed the countless hours that Shirley stayed and kept her company, plus a few games of checkers or the times that we would sit outside in the warm sun. When the sun was shining, the nurses would say, “Clara is suntanning today”. Friday, Nov. 25, 2022, was our final goodbye.
Clara’s funeral service was held on Friday, Dec. 2, 2022, at First United Church, Melville, SK, with the Rev. Brian Mee officiating. Organist Geri Miller led the congregational hymns. Other participants were Lindsay Lemaire reading scripture, Travis Lemaire presenting a eulogy and the Ivanochko family offering a tribute. Interment took place in Yorkton Memorial Gardens, Yorkton, SK, with Brian Schmidt, Nick Schmidt, Clifford Ivanochko, Daryl Clark, Melanie Clark and Ben Marcino acting as pallbearers.
Arrangements were entrusted to Matthews Funeral Home, Melville.