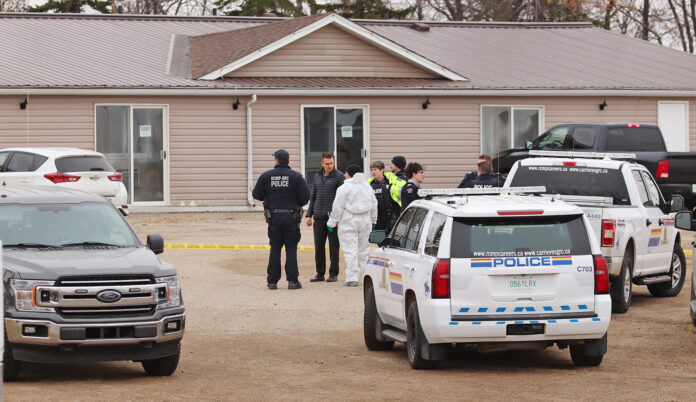 Saskatchewan RCMP Major Crimes, with support from RCMP Detachments and specialized units, continues to investigate the homicide of an adult male that occurred at a business on 3rd Avenue West in Melville, SK, on the morning of Wednesday, November 2, 2022.

The identity of the deceased has been confirmed through autopsy performed by the Saskatchewan Coroners Service. 26-year-old Tristan William Hughes-Nyszczuk from Sherwood Park, AB, was located deceased at the business by police who were responding to reports of gun shots at that location. Another adult male, whose name will not be released, was located at the scene with life-threatening injuries and was taken to hospital for treatment. We will not be providing updates on his condition as this is considered private health information.

At 10:35 a.m. on Wednesday, the Saskatchewan RCMP issued an emergency alert advising the public to be vigilant as the vehicle identified as being involved in the homicide was located abandoned and burned on Highway #10 near Duff, SK. At that point in the investigation, police had no information about where the suspect(s) might be, whether they had access to a vehicle, or if they would seek a ride from the many motorists who travel along that highway.

As the investigation progressed throughout the day, it was determined this was a targeted attack. As such, the alert was cancelled at 1:33 p.m., as investigators had no evidence to suggest a heightened risk to the general public’s safety. At that time, police asked the public to remain cautious and to report any suspicious activity – including the thefts of vehicles – to police.

The suspect(s) involved in this incident have not been located and no arrests have been made. Police do not have further information regarding the suspect(s) – including physical descriptions, images or identities.

Anyone with information regarding the homicide of Tristan William Hughes-Nyszczuk, or the events leading up to his death, is asked to contact their local police immediately. Information can also be submitted anonymously to Crime Stoppers at 1-800-222-TIPS(8477) or online at www.saskcrimestoppers.com. Saskatchewan Crime Stoppers will pay up to $2,000.00 for information that leads to an arrest or charge of person(s) responsible for this offence or any other serious crime.