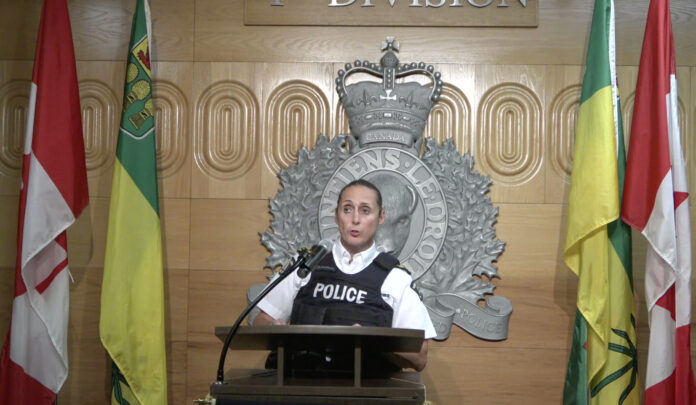 Following is the complete statement by Saskatchewan RCMP Commanding Officer Rhonda Blackmore made on September 7, 2022 regarding the arrest and death of Myles Sanderson:

This evening our province is breathing a collective sigh of relief, as Myles Sanderson is no longer at large. I can confirm that he is no longer a threat and there is no risk to the public relating to this investigation.

I am going to provide a timeline of events this afternoon that led to his arrest.

I will also provide some insight into the operational work that occurred over the past four days.

Here is what I can share with you about the Saskatchewan RCMP response in this investigation:

At 6:20 a.m., one of the two police officers left the first scene, to go to another scene on James Smith Cree Nation. He advised he arrived at the second scene 12 minutes after departing the first.

At 6:35 a.m., because of the significant risk to public safety identified, the Saskatchewan RCMP prepared to issue an emergency alert. It was drafted, reviewed, verified and issued at 7:12 a.m.

The magnitude of this investigation is immense. Over the past nearly four days, over 160 Saskatchewan, Manitoba, Alberta and Ontario RCMP and municipal partner agency employees – both police officers and civilians – have been working nonstop on this investigation.

On Wednesday, September 7, 2022, 2:07 p.m., Wakaw RCMP received a 911 report of a break-and-enter in progress in the Wakaw detachment area. Further information provided stated Myles Sanderson was standing outside of a residence, northeast of Wakaw, and was armed with a knife. Sanderson stole a white Chevrolet Avalanche truck with Saskatchewan license plate 953-LPL and fled the property. The homeowner was not injured.

All available police resources in that region immediately responded to the report, including a neighbouring RCMP detachments and an SPS and RCMP Aircraft.

At 2:49 p.m., an emergency alert was issued to help ensure the safety of residents in the Wakaw region and travellers on the highway.

Between 2:49 and 3:35, the Saskatchewan RCMP Operational Communications Centre received more than 20 calls from the public with potential sightings of the white Chevrolet Avalanche.

The white Chevy truck was seen by a Rosthern RCMP officer driving in an unmarked vehicle, traveling west along highway 1 toward Rosthern at a speed recorded at 150 km/h. Police confirmed the license plate matched the initial report.

At approximately 3:30 p.m., the suspect vehicle was seen travelling south on Highway 11, south of Rosthern. To ensure the safety of drivers on the highway, the vehicle was directed off the road into a nearby ditch.

Police officers surrounded the vehicle and through verbal identification, confirm the identity of the driver to be Myles Sanderson.

He was arrested by police and taken into custody. A knife was located inside the vehicle.

The emergency alert was cancelled at 3:50 p.m. once the identity was confirmed and taken into police custody.

Shortly after his arrest, he went into medical distress. Nearby EMS were called by police to attend the scene and was transported to a hospital in Saskatoon. He was pronounced deceased at the hospital.

Over the past four days, RCMP officers have been working on:

And this work will not stop.

Saskatchewan RCMP continues to investigate this tragedy and a police presence will continue in the James Smith Cree Nation and Weldon communities for the next while.

Again, I offer my deepest condolences to families and all those affected by these events. Our thoughts are with you, and I hope that now you will be able to start healing. Thank you for cooperation during this very difficult time.

I would like to acknowledge the support of our municipal and provincial partners, as well as the RCMP officers who worked tirelessly to bring this to conclusion.

Today I was able to see firsthand the generosity and support from the residents of the James Smith Cree Nation and Weldon.

Finally, I would like to thank all the members of the public, who submitted tips and followed precautions.

Thank you all for doing your part in keeping one another safe.