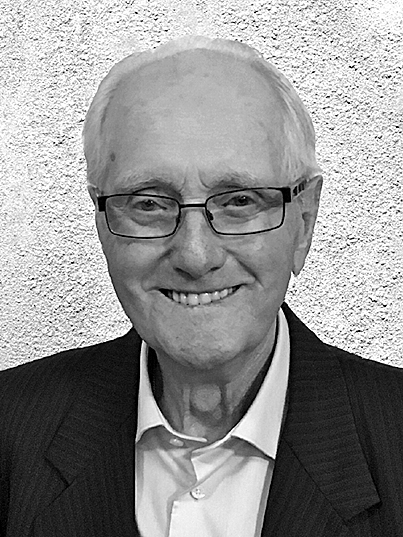 Peacefully, surrounded by family, our dear father and grandfather, Reinhold Miller, entered his eternal home on Thursday, Aug. 19, 2021, at the age of 93 years.
Reinhold was born July 12, 1928, on a farm in the
Koenigsberg district. He was the fifth of six children born to George and Emelia Miller. He attended Wilton School in the Birmingham district.
On Dec. 10, 1954, Reinhold married Adeline Schneider, daughter of Fred and Margaret (nee Kraushaar) Schneider. Reinhold and Adeline were blessed with three children. Their first farm was in the Colmer district and then in 1961 moved to another one near Fenwood. Together they farmed for 46 years. As well as farming, Reinhold did other jobs on the side to provide for his family, including working at Western Produce and doing custom work as available. In 2000 they sold the farm and started their retirement in Melville.
In his spare time, Reinhold enjoyed fishing, tinkering in his work shed, attending hockey games, going for drives checking on progress of seeding, growth and harvesting of crops, meeting with family and friends for coffee, as well as going out for dinner. He enjoyed meeting people and conversing with them. Reinhold’s most favourite times were getting together with family, which included playing crokinole, dice or aggravation. In their retirement, Reinhold and Adeline enjoyed trips near and far with their children and grandchildren. These included Vancouver, Vancouver Island, Toronto, Niagara Falls, Ottawa, Edmonton, Saskatoon, Mexico, Radium Hot Springs, Besnard Lake, Last Mountain Lake and one-day fishing trips with Dale or Allen.
On Aug. 19, 2020, Reinhold moved to St. Paul Home, where he was well cared for until his passing.
Reinhold will be missed and lovingly remembered by his children, Gloria Kondel of Sherwood Park, AB; Dale Miller (Julie) of Watrous; Allen (Lois) Miller of Regina; grandchildren Neil (Carolina) Kondel, Landyn Miller and Lindsay Miller; sister Esther (William) Schindel; sisters-in-law Helen Miller, Marjorie (Jack) Hanlon and Lucille Schneider; and numerous nieces and nephews.
Reinhold was predeceased by his wife, Adeline; parents George and Emelia Miller; brothers Arthur (in infancy) and Erwin (killed in action in World War II); sister and brother-in-law Erna (Fred) Hauser and brother Walter Miller; son-in-law Gordon Kondel; mother- and father-in-law Margaret and Fred Schneider and brother-in-law Norman Schneider.
Gone but never to be forgotten, our memories of you will live in our hearts forever.
Until we meet again.
Reinhold’s funeral service was held Friday, Aug. 27, 2021, at Matthews Funeral Home, Melville, with the Rev. David Hauser officiating. Family members shared memories with those gathered through stories and a slide presentation. Pianist Cathy Miller led in the hymns, “Amazing Grace” and “How Great Thou Art”. Following a brief reception at the funeral home, interment took place in the Melville City
Cemetery with Reinhold’s children and grandchildren acting as pallbearers.
Thank you to Dr. Eshawesh for your direction and care over the years. Also, a big thank you to St. Paul Lutheran Home staff for their love and exceptional care given to Reinhold during his year of residency there.
Arrangements were entrusted to Matthews Funeral Home, Melville.