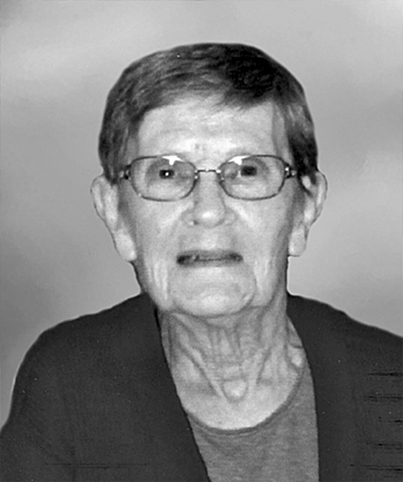 Marian Florence Sandbeck was born Aug. 8, 1929, to Florence (nee Torgerson) and Albert Sandbeck at the family homestead near Mossbank, Sask. She was the youngest of five children, adored by her older brothers, Orville, Clifford and Marnald, and also beloved by her best friend and sister, Evelyn.
Marian grew up on the family farm during the dry years of the Depression. One of her childhood memories was the surprise of raindrops falling on her face, unaware that it was her first experience with rainfall.
In her high school years, Marian was a typical teenager, spending time with friends and coaxing her older brothers to take her and Evelyn along to community dances. At age 16, she and Evelyn enrolled in Lutheran Collegiate Bible Institute at Outlook, Sask., for a year.
Marian began her career as a telephone operator for Saskatchewan Government Telephones in various communities. In 1951, this career took her to Whitewood in the role of Chief Telephone Operator. Shortly thereafter, she met Jimmy Harrison while attending a dance at Bird’s Point, Round Lake. She was smitten and later discovered that he had already noticed the “new girl in town”! She accepted a ride home with him and recalled being disappointed that he didn’t kiss her good night! What a gentleman! One year later, they married and began their life together, a union that lasted over 62 years. They welcomed with love six daughters: Susan, twins Gwen and Gaye, Mary Lou, Deborah Ann and Jacqueline. Marian was thrilled to be Grandma to Jordan, Robin, Alison, James and Sean. She was also delighted to be Great-Grandma to Samuel, Claire, Jonathan, Khloe, Kate,Fara, Shea, Henry and Adeline.
After residing in Moosomin for many years, Marian and Jim returned to Whitewood in 1984. They reunited with friends and renewed their love of dancing, joining dance clubs and teaching old-time dance steps to a younger generation.
Marian also became active in St. Mary’s Anglican Church, proficient in many roles. She was a loving and devoted wife, mother and homemaker, well known for her quick wit and dry humour – a proud Norwegian!
Her beloved Jim passed away in 2015, and Marian continued to live in their home, where she remained until her passing on Tuesday, Dec. 1, 2020.
Marian was predeceased by her parents, her siblings, infant daughter Deborah Ann and her “sweetheart”, Jim. She is survived by her daughters and their families, sisters-in-law Liz Sandbeck and Lovella Jarvi, brother-in-law John Harrison, special nieces and nephews, their families, cousins and many friends.
At Marian’s request, a graveside service will take place in the spring of 2021. Memorial donations may be made to the MS Society of Canada-SK Division, 150 Albert St., Regina, SK S4R 2N2 or to the CMHA SK Division (Canadian Mental Health Assoc.) 2702 12th Avenue, Regina, SK S4T 1J2.
Arrangements were entrusted to Matthews Funeral Home, Melville and Whitewood.