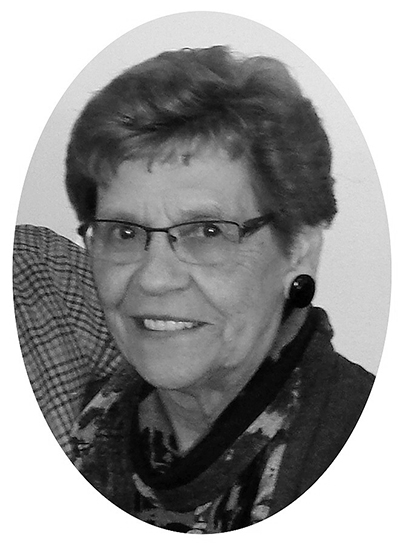 Irene Jean McCallum of Melville, Sask., passed away at St. Paul Lutheran Home on Saturday, July 18, 2020, one day shy of her 89th birthday.
Irene was born on July 19, 1931 in Melville to Alex and Pearl Stelmakowich and was raised on the family farm near Fenwood, Sask.
Irene is predeceased by brothers, John, Matt, Mike (Lefty), Ernest, Irving and Kenneth (in infancy;) and sisters, Anne, Alice, Ollie, Joanne and Evelyn. She is survived by brother, Wayne; and sisters, Bernice (Finch) and Delores (Davis).
Irene is survived by son Darryl, wife Marsha of Regina and children, Andrew McCallum (wife Kathy, sons Jackson and Parker) of Regina; Robert McCallum (daughter Evelie) of Maple Creek, and James McCallum of Regina. Son Douglas, wife Marie of Regina and children, Tmira Marchment (husband Dan, daughter Willow and son Reed) of Regina, Miranda MacCallum-Johnston (husband Robert, sons Finn and Maksym) of Regina and Shannon MacCallum of Calgary, Alta. Daughter Heather Wallerstedt (partner Dennis Dorchester) of Carmangay, Alta. and son Ean Wallerstead of Oklahoma.
Irene married Ian McCallum of Melville on July 5, 1951 in Rainy River, Ont. where Ian had already started working for the CNR. They were married 49 years and raised three children. Because of Ian’s work, the family moved seven different times covering three different provinces, finally returning to Canora, Sask. in 1988 where they settled into retirement.
Irene and Ian loved Crooked Lake and retirement offered an opportunity to expand the family cabin to accommodate the growing family. Summers were busy and they continued to commune back and forth from Canora to the lake until Ian’s untimely death in December of 2000. Irene returned to Melville the following year to be closer to family.
Irene was busy. Retiring from Sears shoe department meant she had more time to holiday to places like Texas, Louisiana, Mexico, Portugal and Spain. Her and Ian particularly enjoyed their road trips to Arkansas where Heather lived and worked, training race horses. She now had time to do more knitting; sold her mittens and scarves at local trade shows and donated dozens of afghans to the special care home in Melville.
She especially loved games of chance. Tuesdays and Thursdays were bingo days; almost every evening she played scrabble or cards with her dear friend Betty and always found time for the casino excursions in North Dakota with her good friend Sophie.
On her parents 50th wedding anniversary, she and her sisters all wore the same shimmery gold dresses to honor this milestone. This was such an easy choice for Irene who was never afraid of color and was quite a snappy dresser. Her wardrobe was full of oranges and yellows and pinks.
She was such a good teacher. You learned very quickly to pay attention to what she was doing when making perogies because her recipe served only as a mere suggestion. You learned when the bell rang at the lake for lunch it meant ‘now’ or your next meal would be supper. Tmira and Miranda’s children still use the same bell which hangs just outside the cabin’s door.
She had a green thumb and loved her flowers. They grew everywhere at the lake; in pots, in gardens and in hangers from the deck. She loved her year in Caleb Village; her outside patio was right next to the garden. She was grateful for the seat on her walker, as it served as a ledge on which to balance her flowers as she scooted around the nursing home. Her health failed her this year; some days were better than others but rarely would you find her without makeup, nails polished, hair done and wearing jewelry.
Irene loved her children, and dedicated herself to raising them. We’ll remember her for so many reasons but most of all we’ll remember her for the tremendous love she showed us and for being wonderful mom, grandma, great-grandma and a role model in all of our lives.
Irene was laid to rest beside her late husband in a graveside ceremony at Melville Cemetery on Thursday, July 23, 2000.
Special recognition to Terry Halyk and the amazing staff at St. Paul Lutheran Home for their kindness and compassion; to Kim Rutzki and Dr. Eshawesh for all their attention and guidance and to the Melville St. Peter’s Hospital staff who were always so attentive and caring.
In lieu of flowers, donations in the memory of Irene McCallum can be sent to Palliative Care, St. Peter’s Hospital Foundation (Melville), Box 1810, Melville, Sask., S0A 2P0.
Those whom we love go out of sight,
But never out of mind;
They are cherished in the hearts
Of those they left behind,
Loving and kind in all their ways,
Upright and just in all their days –
Sincere and true in heart and mind,
Beautiful memories they left behind.
A constant wish that they were here;
Others were taken, yes we know;
But she was ours and we loved her so.
Arrangements were by Bailey’s Funeral Home, Melville.