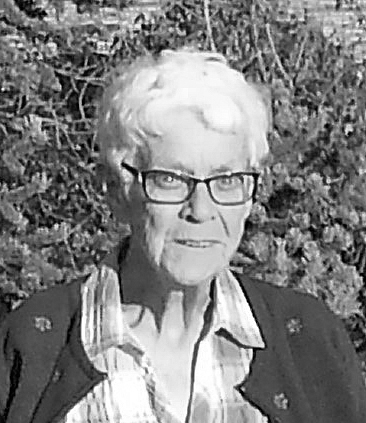 It is with extreme sadness that we announce the passing of our beloved mother, Edna Joy Maddaford on Sunday, June 16, 2019.
Edna was born on Oct. 20, 1935 to George and Dorothy Eckardt on the farm near Waldron SK.
She is predeceased by her loving husband, Floyd (Rog) Maddaford; her mother and father; her brothers, Bill (Edna) Eckardt; and Bud (Violet) Bissette; all of her sisters, Margaret; Betty (George) Raven; Ruth (Emil) Buchart; Olive (Robert) Micheal; and Mary (Robert) Edlin. Edna was the last of her family in that generation.
She is survived by her daughter, Kimberly Parlee (Frank Shea); and her sons, Russell (Linda) Maddaford; and Farley (Linda) Maddaford. Her grandchildren, Robbie Maddaford, Amanda Maddaford, Benjamin Maddaford, Samuel Maddaford, Jonathon Maddaford, Mathew Parlee, Joseph Parlee and Thomas Parlee and her great-grandchildren.
Edna was born on the family farm in the Cana municipality a few miles from Waldron SK in the Hilltop School District, south of Yorkton. This is where she grew up the youngest of eight children. Like most small farm kids of her era Edna had chores to do such as feeding and caring for animals, fetching water and firewood, and other domestic duties. As a teen she worked a the local highway store called Dad’s G&G a half mile from her farm.
On Oct. 20, 1956 she married Floyd (Rog) Maddaford and they moved to Saskatoon where Rog worked on the railroad. In 1958 they moved back to Yorkton to be close to family.
Edna was an active homemaker for her young family of five and kept very busy gardening, cooking and sewing. Edna was an excellent homemaker; her baking, cooking, and canning skills were rarely surpassed. Her cookies and tarts were legendary and all the neighbourhood kids were welcome to a sample. Edna was an excellent seamstress and she enjoyed crafts of all kinds.
Edna went back to school as an adult and was proud that she was able to complete her Grade 12. Like so many of her generation, schooling for women was secondary to the greater family needs. She was an inspiration to many, but particularly to her children for this achievement. Schooling was important and it was pressed home by Rog who who worked diligently on correspondence papers for power engineering and Edna who went on to be a licensed nursing aid at the Anderson Lodge in Yorkton. She loved those years at the Lodge and made many friends. She was a volunteer at SIGN for many years and was a part of setting up the first shelter in Yorkton.
In 1980, Edna and Rog moved to the Edna’s family homestead south of Yorkton and enjoyed rural life, a dream for both, fulfilled. She enjoyed her large garden and continued to work at the lodge.
Throughout her life Edna found great pleasure in being with family. She reminisced fondly of the times she was able to care for nieces, nephews, and grandchildren — at all stages in their lives. She was a true mother in every sense of the word. Visiting in person, over tea, or on the phone was always relished and nothing topped hot conversation or a rousing game of cribbage.
Winters on the farm were too much for Edna as she aged and in 2010 she moved to Melville. In 2017 she moved to the Gladstone Seniors Residence in Yorkton and again made many new friends and acquaintances. The staff, she said, treated her like gold and she settled in nicely. Although she did enjoy the escapes to the farm for celebrations and meals and her regular trips for onion rings and root beer — simple pleasures.
Mother passed away peacefully at St. Peter’s Hospital in Melville on Sunday, June 16, 2019.
The family expresses their gratitude to all the caregivers at St. Peter’s in Melville, the Pioneer Residence in Ituna and the staff at Gladstone Seniors Residence in Yorkton for their warmth and kindness in making mom’s last years comfortable.
A donation in lieu of flowers to St. Peter’s Hospital Foundation would be greatly appreciated.
Edna will be laid to rest in the Saltcoats cemetery beside Rog, her beloved husband.
A graveside service and luncheon to follow will be held on Saturday, Aug. 3, 2019 at 11 a.m.
Arrangements entrusted to Christie’s Funeral Home and Crematorium, Yorkton, SK