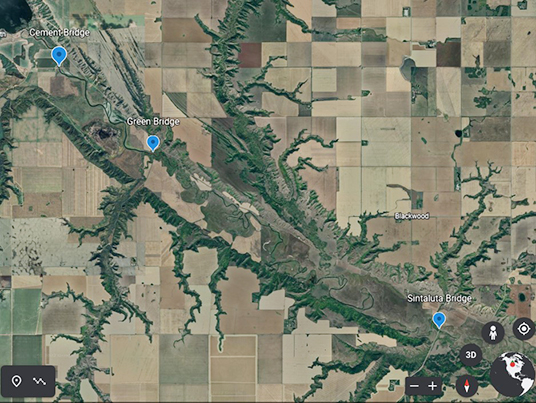 Aging infrastructure has led RM councils in Indian Head and Abernathy to discuss repairs for bridges spanning the Qu’Appelle River. An informational meeting was held with ratepayers last week to explain the situation and review options.
The RM of Indian Head and the RM of Abernathy share responsibility for maintaining multiple bridges that cross the Qu’Appelle River. On November 9, councilors and staff from both municipalities met with ratepayers at the Indian Head Heritage Club to talk about three bridges in particular: the Sintaluta Bridge, Green Bridge, and Cement Bridge.
SARM inspectors regularly examine bridges throughout the province and supply local RMs with a list of repairs to make; however, these reports provide little direction regarding prioritization of tasks. The RM of Indian Head has been working with engineer Jim Zacaruk of Zacaruk Consulting to gain a better understanding of the SARM reports, assess the structural integrity of local bridges, and determine appropriate priorities for maintenance tasks or repairs.
Zacaruk informed the group at last week’s public meeting that recent work on the Sintaluta Bridge on grid road #606 should ensure it remains viable for several more years. Preservatives were added to timbers and embankment material was replaced where it had eroded around abutments.
Another bridge located just down river from Highway 56 and referred to as the Cement Bridge, was also evaluated. Abutment walls under the bridge are gradually shifting towards the river so the RM will monitor them, especially during seasons of high water flow. Zacaruk noted that as the Cement Bridge ages and eventually needs more extensive repairs, the RM would need to consider whether or not to make significant investments to that area of infrastructure since there is a highway bridge nearby.
After assuring ratepayers that the Sintaluta and Cement Bridges are relatively stable, the engineer addressed maintenance at a third bridge located between the first two. It is referred to as the Green Bridge because of the green, steel framing of the truss bridge. The structure is designed to support passenger cars and trucks, not farm machinery.
There is no indication of foundational damage to the bridge but the wooden decking is wearing out, causing safety concerns. Zacaruk stated that steel girders directly under the decking might also be significantly rusted but this could not be determined until deck boards are removed.
The engineer recommended removing the single layer of wooden decking and replacing it with a double layer of boards. This would allow boards on the top layer, which wear out faster, to be easily replaced while the bottom layer would maintain the structural stability of the bridge. An estimated cost for the project is $180,000 and would include a contingency amount in case some of the steel pieces supporting the decking have rusted and must be replaced.
Considering the age and design of the Green Bridge, the proposed work could potentially be only a temporary repair. Zacaruck suggested that deterioration from crevice corrosion could mean that a full bridge replacement would be needed within the next 10 to 20 years. Although government funding might be available for a portion of replacement expenses, it could still cost the RMs $500,000 or more and could be a very lengthy process.
Rural municipalities are responsible for bridge repair costs. Indian Head councilors explained that funds for repairing the Green Bridge would likely come from the municipalities’ regular roadwork budget, limiting how much work could be done on other projects in the RM.
Following the description of the situation, councilors sought to gauge ratepayer’s interest in repairing the Green Bridge since it’s primarily used by local landowners during the growing season. Some at the meeting expressed strong conviction that the bridge must be repaired since the alternative of closing it would significantly lengthen their commute times. Many were concerned about the high cost estimate for replacing the bridge decking and suggested using only one layer of boards since that was previously sufficient. Others wondered whether it was worthwhile to make a repair that could later be negated by a need to replace the entire bridge.
Councilors will take the ratepayers’ feedback into consideration as they continue to explore options for Green Bridge maintenance or replacement.