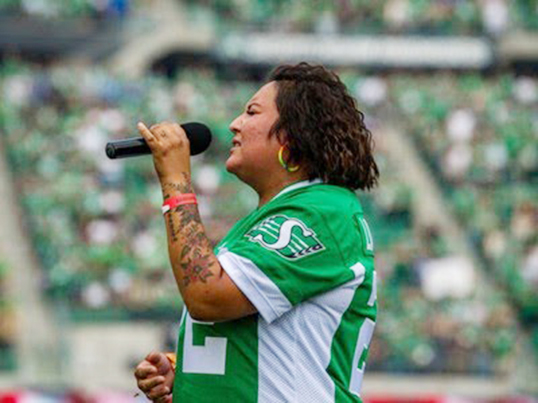 This year has brought a few memorable moments for Teagan Littlechief.
The singer/songwriter from White Bear First Nations was named Indigenous Artist of the Year by the Saskatchewan Country Music Association. She went on to perform at the Big Valley Jamboree in Craven and was voted Saskatchewan’s Next Big Thing (Pure Country 92.7 FM).
But Littlechief says that having the opportunity to sing the National Anthem at the upcoming Grey Cup in Regina will be a “dream come true.”
“I’m super excited! There are a lot of things that I’ve dreamed of doing in my life – and this is one of those things! I have been singing the anthem for the Saskatchewan Roughrider games this season – which has been fantastic. But since I was a kid, I’ve thought about how awesome it would be to sing the National Anthem at something really big – like the Grey Cup.
“Now it’s happening! It’s still hard to believe!! I think I’m making my family a bit crazy because – when I stop and think about the fact that I’m really doing this – I freak out a bit (in a good way)!”
Littlechief notes that she has been asked to perform a tri-lingual version of the National Anthem – something that she says is both a challenge and a unique opportunity.
“I’ve been asked to sing the anthem in English, French and Cree. So, I’m dividing the song into 3 sections and will sing each section in a different language.
“For me, the French portion of the song is likely the biggest challenge, since my French is a bit weak. So, I reached out to people who were better at speaking French than I am, to make sure that I’m pronouncing the words correctly.
“With the Cree portion of the song, proper translation isn’t as difficult as a person might think. But it takes a bit of work.
“There are English words and phrases that just don’t exist in the Cree language. So, I’ve had to find the proper way to say the same thing in Cree. I actually reached out to my Cree instructor as well – to get help with that – and to make sure that I was pronouncing all of the Cree words properly too.”
Although this tri-lingual rendition of ‘O Canada’ might sound quite different to some, Littlechief says that the fundamental integrity of the anthem remains.
“There was a bit of a ripple on social media when people found out that the 3 languages would be meshed together into the anthem. And doing the translation into Cree does mean that I’ve incorporated something new into it. So, this is a different rendition of ‘O Canada’ than people are used to hearing.
“But this is still our National Anthem. It is something that the people who speak each of these languages have in common. So, I’m not messing with it.”
Along with her music career, Littlechief also works as a counsellor – and says that having this opportunity will allow her to demonstrate something important to the young people that she works with.
“When I’m working with young people, I tell them that they can be whatever they want and do whatever they want – but they have to be the ones to make it happen. Your dreams can come true. But you have to work for it!
“I’m hoping that this will show them that what I’ve been saying is true. This is one of my dreams – and it’s happening. But I’ve worked hard to get to a place where it could happen. And since I’ve been asked to do this, I’ve been putting in a lot of time practicing. I want to be sure that this performance is perfect!”