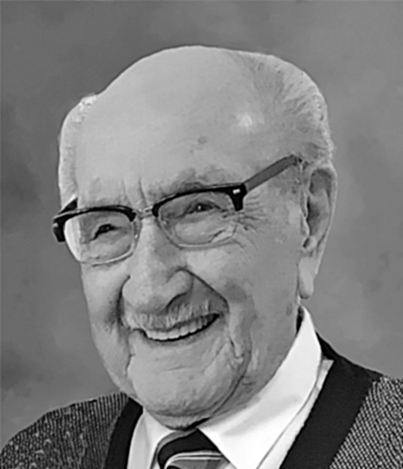 In loving memory of Everrette Thompson of Whitewood, SK, beloved husband of 73 years to Thelma Thompson, who passed away peacefully on Friday, Oct. 21, 2022, with his family by his side.
Dad was the youngest of a family of twelve, seven girls and five boys. His mother’s name was Katie Louise Thompson and his father’s Thomas George Thompson. He was born on a farm six miles east of Wapella on Oct. 5, 1929, assisted by a midwife. Dad grew up on the farm in Wapella until 1936 when the family moved to Brandon. They then moved to Nipawin in 1946 when Dad was in Grade 11.
Over the course of Dad’s life, he did many different things, and that is likely why when we needed help doing something he knew how to do it. As a young man in Brandon, Dad shined shoes, set up bowling pins, delivered groceries, filled and packed shelves and delivered ice with a horse and wagon. In Nipawin, he worked construction, salesman at the Dodge Dealership, mechanic, parts man, and he serviced trains after work keeping the coal fire going. In Wapella, he worked with his brother at Thompson Motors, had a feed lot, had gravel trucks, co-owned the Triple T Service Station and Restaurant, owned the Robinson Store, owned Thompson Construction, was in real estate and built spec homes. He was self-employed much of his working career that lasted up until 2018 when he retired from being a salesman for Nelson Homes at the age of 88.
Dad was very community-minded – 56 years curling, 50 years in the Elks and 25 years on the school board. He specialized in fund raising for special causes.
In 1947 Dad had a life change that was the beginning of an unbelievable love story which lasted 73 years; he met the love of his life, Thelma Patton. They were married May 17, 1949, and had five children: Shelley (James), Richard (Patsy), Janis (Laird), Bruce (Jennie) and Paul (Leanne); grandchildren Jodi (Chad), Greg (Kyla), David (Michelle), Shane, Tyler (Nikki), Jared (Tia), Katie (Brett), Nicole (Korrie), Brad (Karla), Samantha, Jade, Jake and Ally; great-grandchildren Josh, Gracie, Taylor, Rhyan, Benjamin, Diem, Scarlett, Kourtnay, Violet, Henry, Nate, Sadie, William, Jonathon, Isabel, Brynlee, and Vann.
Dad was the greatest man and an example for us all. Love you, Dad.
Donations in memory of Everrette may be made to the Whitewood Curling Club. To leave a message of condolence for the family or to make a charitable donation, please visit matthewsfuneralhome.ca
Funeral arrangements are entrusted to Matthews Funeral Home, Whitewood and Melville.