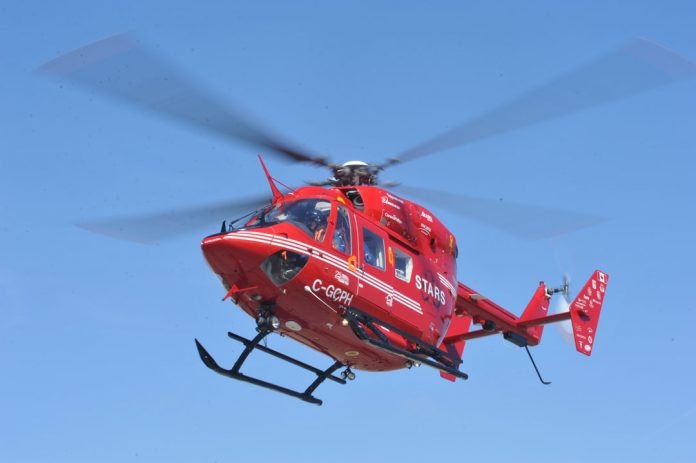 While STARS celebrates ten years of fighting for the lives of critically ill and injured patients across Saskatchewan, five Crown corporations have announced funding to help ensure the non-profit air ambulance continues its service for decades to come.

Since 2012, STARS has carried out more than 9,200 missions to more than 500 locations across the province, and today Hon. Don Morgan, Minister of Crown Investments Corporation and Minister Responsible for all Major Crown Corporations joined STARS staff, patients and representatives from the Crowns to announce the renewal of funding from SaskPower, SGI, SaskTel, SaskEnergy and CIC.

“Saskatchewan’s Crowns have recognized the value of STARS since its inception in Saskatchewan and have supported this essential air ambulance service for 10 years,” said Don Morgan, Minister for Crown Investments Corporation (CIC).  “Today SaskTel, SaskPower, SaskEnergy, SGI and CIC are proud to continue this support for another five years.”

Through the renewed funding agreements with the five Crown corporations, STARS will receive $10 million, or $2 million per Crown, over the next five years. With this new gift, cumulative giving from the province’s Crown corporations will reach a total of $30 million for STARS in Saskatchewan.

With bases in Regina and Saskatoon, STARS operates 24 hours per day, seven days per week providing emergency air medical services to patients across the province. Those in rural and remote communities are well-served by STARS, as are urban patients who are working, playing or travelling across the province.

“When seconds count, STARS is honoured to give those in need a second chance, and we are proud to have become an integral part of Saskatchewan’s health care system in the last ten years, working alongside our local partners in the chain of survival,” STARS president and CEO Andrea Robertson said. “The ongoing funding from our provincial government along with the incredible support of our Crown corporations is the very lifeblood behind our life-saving operations.”

In January 2021, the Government of Saskatchewan renewed a 10-year contract with STARS to continue to fund 50 per cent of the charitable air ambulance’s operations. As well, the Government committed to provide $13 million to STARS’ Keep the Fight in Flight capital fundraising campaign to purchase one new helicopter.

STARS patient Draedon Faubert is a former patient who knows first-hand the value of the service STARS provides. He and his family are grateful to the funders who make STARS possible.

Draedon was involved in a highway rollover on his sixteenth birthday at the height of the COVID-19 lockdown. With multiple severe injuries, he was barely alive and desperately in need of critical care. STARS landed at the scene, and the air medical crew employed multiple tools and interventions to fight for his life enroute to the operating room.

After nearly six gruelling weeks in the ICU (where he and his mother were quarantined, due to the COVID-19 lockdown), Draedon went on to hundreds of painstaking days in rehab, and was eventually able to go home, talk, and later even walk again.

“Draedon’s doctors and care team in Regina and Saskatoon were excellent, working amazing magic to enable him to recover, but none of it matters if he hadn’t made it to them alive,” said Draedon’s father, Chris. “Because of STARS, our son’s story gets to continue on.”