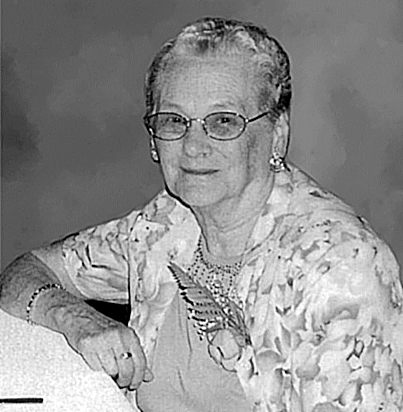 Doris Viola Davis of Whitewood, SK, went to reside with her Lord in Heaven on July 22, 2022. Doris was born on Feb. 19, 1927, at Lake Valley, SK, to Lewis and Minnie Lien. She grew up on a farm two miles south of Lake Valley with her siblings, Beulah Banyard, Mervin Lien, Joyce Daniel, Muriel Kober and Robert Lien. Doris attended Lake Valley School and graduated in 1945. Life was hard on the farm during the dirty thirties, but they found ways to have fun. They got together with family and neighbours and played ball or went skating on Sundays.
Doris went to Moose Jaw and took a two- month teaching course at Moose Jaw Normal School after high school. She first taught at Barton School near Marquis, SK. She went to the Hopehill School at Whitewood, SK, in March 1946. Her first impression was that she was coming into a forest after being raised on the wide open prairies. She sure hoped the driver knew where he was going. Doris boarded with John and Minnie Daniels.
It was here where she met the love of her life, Harvey. They were married on Feb. 3, 1947, at her Aunt Jessie and Uncle Chesley Hopper’s home in Moose Jaw, SK. Feb. 3, 1947, was recorded as the worst blizzard on record. Harvey and Doris had three sons and three daughters. She quit teaching once her first child was born.
Harvey and Doris farmed and operated the Hopehill country store. There were many trips to Brandon taking livestock to the auction and bringing back supplies. The Hopehill store was closed in 1963 when the twins were born. Harvey and Doris retired from farming in 1978. They enjoyed travelling, fishing and camping. They travelled to several places within British Columbia, Alberta and
Saskatchewan and went to Florida with two of Doris’s siblings in 1970. Harvey and Doris celebrated their 50th anniversary in 1997 just before Harvey passed away.
Doris moved to Whitewood in 1997. She became active in several activities. She enjoyed playing cards, shuffleboard, and the teas at the Whitewood Harmony Club. She was active on the Whitewood History Book Committee and the Whitewood Centennial Committee. One of Doris’s dreams came true when the Hopehill and family histories were published in the Whitewood History Book.
Doris moved to the Green Street Apartments in Whitewood in 2015. She then moved to Rudyard Manor in Kipling in 2016. She moved into long-term care first at Wawota in 2021 and then to Kipling in 2022.
Doris had several hobbies such as playing games and cards, gardening, knitting, crocheting, genealogy and entertaining. She loved music from many different genre and loved to dance to the old-time polkas and waltzes. Growing up, her dad and her sister Beulah would play at many dances, and she would go along. Doris always enjoyed the family reunions.
Doris was predeceased by her husband, Harvey; her son, Arnold; her granddaughter, Twyla; her son-in-law, Lester Brickley; her parents, Minnie and Lewis Lien; her sister, Muriel Kober; and her brother, Mervin Lien. She also was predeceased by many close friends and relatives.
Doris is survived by: son Melvyn (Eva), Aaren (Derek) Stroh, Neil (Jacqueline) Davis, Darren (Morgan) Davis; Arnold’s children, Darrell (Jodie) Davis, Thomas (Alysha) Davis, Shannon Davis (Wes); son Boyd (Irene,) Darcy (Janella) Bulizc, Sarah (Chris) Solomon, Douglas Davis, Zenath (Stephen) Yates, Doris Davis (Scott); daughter Dreena Davis, Kurtis Horner, Devaney Mehl (Chad); daughter Ronda Brickley, Chad Smiley (Krystal), Garrett Smiley (Shannon); and daughter Myrna (Reid) Mossing, Quinton Mossing (Delaney), Hunter Mossing and Madison Mossing. Doris also had 26 great-grandchildren and numerous nieces and nephews.
Doris enjoyed her life and wanted to thank those who made it possible. Doris’s family appreciated the excellent care that she received at the Kipling Integrated Care Facility. They thank all the doctors, nurses and care aides. Donations in memory of Doris can be made to the Whitewood Harmony Club.
Doris’s wish was to have a private family funeral, which was held on Friday, July 29, 2022, at Knox Presbyterian Church, Whitewood, with the Rev. Ina Golaiy presiding.
Pianist Linda Houtman led the congregation in the singing of the hymns “Old Rugged Cross”, “Abide with Me” and “Amazing Grace”. Dreena Davis gave the eulogy and the poem “Release Me, Let Me Go” was read. A slide show tribute was presented by Chad and Devaney Mehl. Honorary pallbearers were Aaren Stroh, Zenith Yates, Darren Davis, Doris Davis Jr., Shannon Davis, Devaney Mehl, Douglas Davis, Chad Smiley, Garrett Smiley, Hunter Mossing and Madison Mossing. Interment took place in the Whitewood Cemetery with Neil Davis, Darrell Davis, Sarah Soloman, Kurtis Horner, Thomas Davis and Quinton Mossing acting as pallbearers.
Arrangements were entrusted to Matthews Funeral Home, Whitewood and Melville.