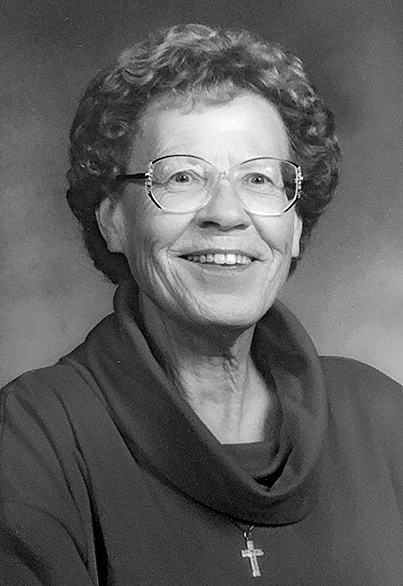 Emily Pauline Churko was born alongside her twin brother Emil, on Sept. 14, 1927, the beloved daughter of Mary (Klypak) and Mike (Nicholas) Churko. She passed away Monday, May 2, 2022 at the age of 94 years.
Born into a family of 10 brothers and sisters on the farm in Plainview, Sask., Emily loved the happy and hardworking life of a big family. She was competitive, cheerful and bright – known for her scholastic ability as well as her playful nature. She and Emil shared a close bond. Before she had even completed high school herself, she answered the call to be an educator during the teacher shortage due to the war. Some of her students, she said, were bigger than she was, but her no-nonsense classroom discipline kept them in line. After the war, she finished high school, graduating with top honours.
Emily moved to Calgary in 1951 and started working in the oil patch in production accounting. In the male-dominated world of oil and gas, Emily made many friends including a tightly-knit group of women who banded together and forged lifelong friendships. They golfed, curled, hiked, travelled and followed sports together. Emily became a rock-solid Calgary Stampeder fan, and she relished the rivalry with her Rider-loving family.
Her career advanced with Shell Canada Resources where she worked in joint-venture operations, budgeting, finance and accounting until her retirement in 1984. Em’s knack for numbers and natural organization and administration skills made her a key part of joint venture teams, and she loved her work. Her biggest frustration was being passed over for promotions by younger men whom she would then have to train.
Following her retirement, Emily threw herself into volunteer work through her home parish, St. Mary’s Cathedral. She visited shut-ins, served as eucharistic minister and served at Mass when Father visited nursing homes and hospitals. Her freedom from the office routine also allowed her to pursue her great love of travel. She visited the Holy Land, Europe, Australia, Maritime Canada and went several times to Hawaii, which she loved most of all.
Throughout her life, Emily kept special time to return to the Melville/Plainview area where she loved to visit her mother until her passing, her brothers, sisters and many nieces and nephews. She felt at home both on her sister Toni’s farm with her family and in Vancouver with her sister Lucille and family. When Emily’s eyesight failed and life in the big city became less comfortable, she returned to
Melville in 2013, moving to Yorkton Crossing Retirement Community near her sister, Ange, in 2016.
Emily was predeceased by her parents, Mary (Klypak) and Nicholas (Mike) Churko; her sisters, Katie (and John) Chopik, Frances (and Tony) Bogdasavich, Helen (and Walter) Mushka, and Lucille (and John) Caines; her brothers, Anton (and Mary), Joseph (and Pauline), Kazimer (and Pauline), and Emil (and Marion); and her brothers-in-law, Terry Wassell and Emil Polegi. She is survived by her sisters, Toni (Antoinette) Wassell and Angeline Polegi; and her many beloved nieces and nephews.
The prayer service was held on Sunday, May 8, 2022 and the funeral mass was celebrated on Monday, May 9, 2022 both from St. Henry’s Roman Catholic Church in Melville with Rev. Father Andrew Sowa OMI as the Celebrant.
Arrangements were by Bailey’s Funeral and Cremation Services, Melville.