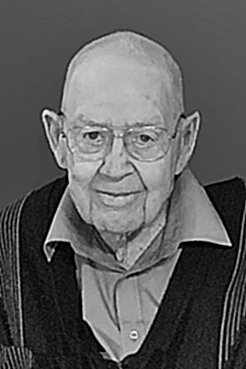 John was predeceased by his parents, Eric Cecil Sanford February 1986 and Susie Sanford (Abbott) July 1976; his loving wife of 58 years, Ida Sanford (Daku) June 2010; daughter, June Bouchard (Sanford) March 2019; and brother-in-law, Bill Williams (2008).
He is survived by his sister, Anne Williams; his daughters, Pat Sanford (Marcel Bourgeois), Doreen Sanford (Robby Harris); son-in-law, Russell Bouchard; three grandsons, Allan Bouchard, Byren (Alissa) Sanderson, Kyle (Brittany) Sanderson; three great-granddaughters, Temperance and Robynn Sanderson and Margaret Sanderson; as well as numerous nieces and nephews.
John met Ida when he was a patient in the Kipling Hospital and they were married on Oct. 30, 1952. They farmed with his father and raised their three girls and (many cattle) in the Moose Mountain Hills north of Kisbey. After 45 plus years on the farm, they sold and retired to Kipling where they became very active members of the community. John and Ida were very active in the Friendship Centre and the Bekevar Presbyterian Church.
After Ida’s death, John was probably even more involved. His regular day would consist of going for a couple of games of pool in the morning and cards in the afternoon. Most people are only lucky enough to find love in their lives once, but John found it twice when he found Vicky Balog. They spent eight years enjoying each other’s company. They were best companions until her passing in October 2019.
With Vicky’s passing and Covid-19 soon to follow, John found it very difficult considering he was such a social person. However, with the help of some very dear friends and the occasional trips to see “His Girls” big and little, he was happy to the end.
The family wants to thank all the staff and support staff at the Kipling Integrated Health Centre for all their efforts in making John comfortable and involved in the community until the end. We also want to thank all our friends and the community support that helped our family through this difficult time. In lieu of flowers, donations may be made to the Heart and Stroke foundation of Saskatchewan, 1738 Quebec Avenue Unit 26, Saskatoon, SK S7K 1V9 or Canadian Cancer Society, 1910 McIntyre Street, Regina, SK S4 P 2R3 or Kipling Integrated Health Centre, Box 420, Kipling, SK S0G 2S0.
Tubman Cremation and Funeral Services in care of arrangements.