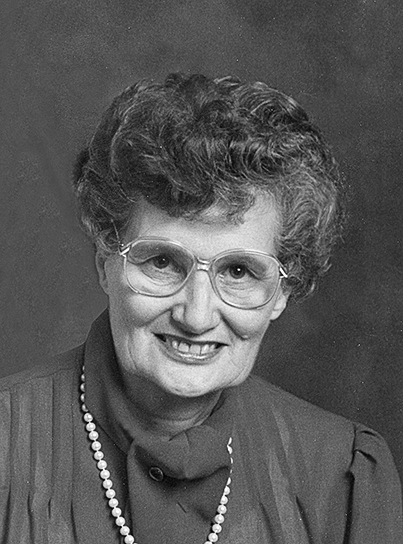 Marjorie Tasker (nee Cross) left this world in her 99th year on Tues., Dec. 21, 2021, to begin her peaceful journey home. She died with her daughters Marian and Maureen holding her and giving her their love and prayers. She was alert, looking at us and knew she was loved right till her last breath.
Mom was born on May 17, 1923 to Reginald and Catherine Cross, of Pleasantdale, Sask., along with her dear twinnie, Mannie (Marian Lux). Mom went to school at Roan Oak, a one-room schoolhouse close to her home farm. She spent a very short time at the convent in Prince Albert, something she truly disliked and was able to go back home to her family after less than a year. Marjorie worked at Becker’s General Store in Lac Vert before coming to Regina, where she attended Reliance Business College and took a position with SaskPower.
She married Alec Tasker in 1953 and began working at Tasker’s General Store in Balgonie. They had a good marriage and would have celebrated their 60th wedding anniversary the year Dad died. Marjorie and Alec bought the store from his parents in 1964. They were both smart, thoughtful business people and together expanded the store, lumberyard, insurance business, flipped many a house and when they retired, we thought, they built and ran a service station. Mom and dad lived in Balgonie for 37 years, first upstairs in the Hyde Block, above the store and then they built a house on Lewis Street in 1955. In 1980, they truly retired to a small farm in the Qu’Appelle area where Marian and her family lived and spent many happy years being Gramma and Grampa. They visited Maureen and her family in Yellowknife and in Florida, and never missed a concert, sports event, or a Christmas with the grandkids in Qu’Appelle.
They sold the farm and built a house in Qu’Appelle in 1989, and much to mom’s delight, her twinnie Mannie had also moved to Qu’Appelle. This was one of the happiest times of moms’ life, she made Sunday breakfasts for Marian’s family after church, got all the stains out of many shirts, t-shirts and so on, and mended many a knee of a pair of jeans, enjoyed having the grandkids come for hot lunches during school, or after school, made buns, pies and especially delicious egg salad sandwiches for family harvest lunches, played cards with Mannie and had long evening phone calls with her every night, grew her three dozen tomato plants (her canned tomatoes were the very best) as well as a wonderful garden every year, enjoyed the church and community and took little shopping trips across the border.
Dad passed away in 2014, just after a move to Fort Qu’Appelle to be closer to needed services. Mom continued to live and enjoy Fort Qu’Appelle. She made new friends and found ways to continue living a good life. In 2020, at the beginning of the COVID-19 pandemic, she became quite ill and moved to live with her daughter Maureen in Sherwood Park, AB. where she remained until her death, lovingly cared for and able to spend time with Maureen’s family. She played crib relentlessly all her life and had a game with her son in law Alan just a few days before she died, rarely did any of us beat her. We never had to worry about counting our hands – as we laid them down she would tell us what we had, and promptly. Marjorie is survived by her daughter Marian (Brian) Zerr, grandchildren April (Chad) Nichol, Natalie and Alex, and Dan (Laura) Zerr and Violet; her daughter Maureen (Alan) Regel, grandchildren Holly (Terry) Hatto, Rayla and Indigo, Robin (Britany) Regel, Ethan, Grace and Rosie, and Taryn (Dennis) Ferguson, Keegan and Ben. She is also survived by many nieces, nephews, great nieces/nephews in both the Cross and Tasker families as well as sister-in-law Nora Cross. She particularly cherished her visits from Mannies’ children, Mickey Lux, Tim Lux and Marj Zerr. She was predeceased by her husband Alec Tasker, her twinnie, Marian Lux, her parents Catherine and Reginald Cross, her mother and father-in-law, Frank and Jeannie Tasker, her brothers John, Jim, Edward (Ted) and Donald Cross, second sister, Kathleen and their spouses, her brothers and sisters-in-law Elsie, Jim, Harold, Loyd, Marjorie and Edward (Ted) Tasker and spouses, special nephews John Cross, Frank Tasker and niece Bev Aveyard and several others. A private prayer service was held in Tubman Funeral Home, Indian Head, Saskatchewan on Wednesday, January 5, 2022 at 7:00 p.m. followed by a private family funeral mass celebrated in St. John’s Anglican Church, Qu’Appelle, Saskatchewan on Thursday, January 6, 2022 at 10:30 a.m. by Rev. Francis Hengen. Interment in Qu’Appelle Cemetery. The family truly regrets that due to Covid-19, the funeral was by invitation only. We would very much appreciate messages from all who wish to send them. Those who wish to may contribute to the Cancer Foundation of Saskatchewan, 4545 Parliament Ave., #200, Regina, SK., S4W 0G3, in mom’s memory. The family offers many thanks to all who shared mom’s life.