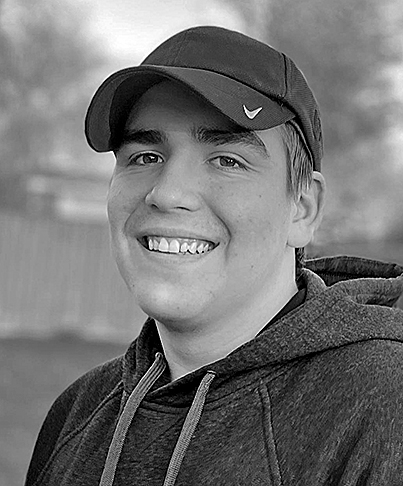 It is with profound sadness that the family of Carter Bear announces his sudden passing on Monday, Dec. 20, 2021, while playing hockey with friends at the outdoor rink in Moosomin.
Carter Lloyd Bear was born to loving parents Tom and Raquel in Moosomin, SK, on April 17, 2004. He was a younger brother to Cody and MacKenzie, a big brother to Connor and a proud uncle to Cooper. He resided on the Ochapowace First Nation and attended school in Whitewood, SK, where he was in his final year, completing Grade 12. Carter was a well-rounded athlete and played drums in the high school band just like his dad. In the summer, he played ball and enjoyed time learning a new trick behind the boat, while in the winter, he excelled at hockey and snowboarding.
Carter played hockey with the AA Melville Millionaires Midget team from 2018 to 2020. For his senior year of high school, Carter wanted to play close to home and was with the Whitewood Jets Midget team. Over the years, he participated in many First Nations’ hockey and ball tournaments with the Ochapowace Thunder and South East Treaty 4, as well as attended both summer and winter Saskatchewan Games, often playing with his cousins, Trinity and Coen Bear. Proud parents Tom and Raquel put on many miles travelling to different rinks and ball fields to cheer him on.
Carter loved spending time with family and friends. Over the years, he enjoyed many family winter vacations to Mexico or snowboarding trips with his brothers, Cody and Connor, and cousin Casey Bear, as well as a road trip to Vancouver with MacKenzie, cousin Boston Bear and friend Paige Muzyka. Summers were spent at the family lake cabin at Bird’s Point. Carter was a hard worker, most recently employed at the Whitewood C-Store and Oly’s Trading Post. He was a friend to all, with a big smile for everyone.
Carter is survived by his parents, Tom and Raquel Bear; siblings Cody (Danielle and son Cooper), MacKenzie
(Brandon) and Connor; Papa Lloyd Nagy; Uncles Marty Nagy (Renee and children Brayden and Cassandra), Tyler Nagy (Melanie and children Aliya and Aubree), Brian Bear (Ivy and children Tristan, Jordan, Logan, Brittney) and Richard Bear (children Kelsey and Casey); Aunts Shauna Bauman (Kelly and children Sierra and Lexi) and Shannon Gatrell. He was predeceased by his grandparents, Trina Nagy and Stan and Lynda Gatrell, and cousin Houston Bear.
Our heartfelt thanks goes out to Carter’s cousin, Boston Bear, and friends Kayden McGillis, Ethan Dartige and Avery Sanguis, who were with him when he passed. We are thankful that he was surrounded by family and friends, was happy and doing something that he loved when he was called Home.
A funeral service was held at the Chief Denton George Memorial Multiplex on the Ochapowace First Nation on
Friday, Dec. 24, 2021. Pallbearers were Cody Bear, Connor Bear, Boston Bear, Avery Sanguis, Trinity Bear, Coen Bear, with MacKenzie Bear and Cooper Bear-Fuchs following. Honorary pallbearers are Kayden McGillis, Riley Stradeski, Wyatt Domoshai, Casey Bear, Blaze Bear, Ethan Dartige, Kiara Kenny and Leighton Delorme.
Arrangements were entrusted to Matthews Funeral Home, Melville and Whitewood.