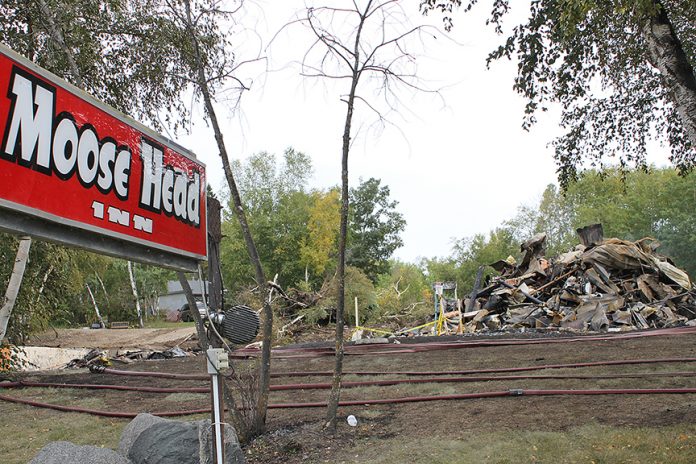 Thin wisps of smoke could still be seen, rising up out of the rubble.

Evidence of the battlelines that had been drawn during the night were all around, in the scorched grass, the blackened backs of trees and the streams of water still running down the hill into Kenosee Lake.

By the time the sun rose on Saturday, Sept. 11th the Moosehead Inn, a landmark that held fond memories for countless residents and visitors to this area, had been reduced to a smoldering scar.

Owner Dale Orsted says that the Moosehead, which had been hard-hit by COVID restrictions, was just beginning to see an upturn in business.

“The COVID restrictions were awful for us. Things were finally starting to bounce back. Once the masking policy was lifted, people started coming again. The cabarets in August were busy. We were planning to carry on with them in September. We were looking forward to Christmas Parties.”

Orsted says that there had been no evidence that anything was amiss when he and his wife Nelly left last Friday.

“We closed at 8 p.m. and the staff was gone by 9 p.m. We were getting ready for tonight. So, Nelly was here until 11 p.m. working on pizzas. She came home and we were in bed around 11:30 p.m. Then we heard these popping noises. It sounded like trees getting chopped down. We looked out and saw the Moosehead was on fire. I called 911 and we tried to get some water on it. But the fire just moved too fast.”

Clarke Lemieux (Fire Chief – Kenosee Lake Volunteer Fire Department) says that when firefighters arrived at the scene, it was evident that the Moosehead could not be saved.

“By the time we got here, the walls hadn’t been breached yet, but you could see the fire through the windows. And the upstairs was fully engulfed in flames. Given the state of the building, our priority became preventing the fire from spreading. So, we focused on saving what could be saved.”

Lemieux credits the work of his team and the other departments that responded with preventing the fire from spreading.

“We dispatched both of our trucks and had 13 volunteer firefighters from our department on scene within minutes. Fire departments from Carlyle, Manor and Oxbow also responded. This massive fire had potential to spread to neighboring houses and would have caused significant damage. The bravery and expertise of the men and women responding enabled us to contain the fire and avoid any damage to neighboring residences.”

Although an exact cause has not been determined, Orsted speculates that an electrical problem might have sparked the fire.

“The fire started in the back, right around where the beer cooler was. We just stocked it on Friday. There didn’t seem to be any problems. But the only thing I can think of is that something happened with that cooler that started an electrical fire.”

Although the loss is a tremendous blow for him and his family, Orsted is grateful for the hard work done by the volunteers who answered the call, and found a small way to say, ‘Thank you’.

“I was watching them and how hard they were working. And I had the thought, ‘I can’t even cook them a pizza’! Then I remembered that we had pizza at the house. I went and warmed it up and brought it to them. So, the firefighters got the very last two Moosehead pizzas!”

He is also grateful for everything that wasn’t lost.

“We’ve all put so much into this place. But we’re all ok. Nobody was hurt. We lost the Moosehead. But we didn’t lose the house. We didn’t lose the ground. We’ve still got our memories. We’ll go on from here.”