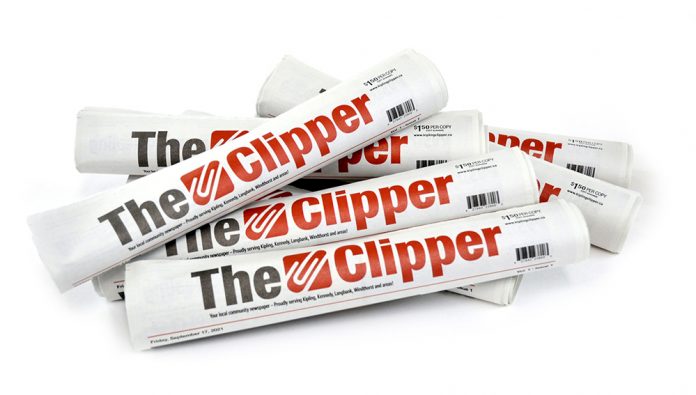 Kipling and area once again has their own community newspaper with the launch of the first issue of the Kipling Clipper.

The subscription-based newspaper will be a Friday publication that will initially be distributed to people in Kipling, Windthorst, Kennedy and Langbank. The newspaper is one of four owned by Grasslands News Group, a locally owned company that also publishes the Whitewood & Grenfell Herald Sun, Melville Advance and Fort Qu’Appelle Times. While their main office is located in Melville, with a satellite office in Whitewood, publisher Chris Ashfield was raised and lives in nearby Whitewood and has worked for more than 30 years in the community newspaper industry. Along with Ashfield, there are three other owners and silent partners in the company, all of which also have decades of experience in the community newspaper industry.

“We are a local newspaper company that works, lives and employs people from the communities we serve. Unlike corporate owners, our primary focus is to provide readers and advertisers with the best local coverage we can and not just treat it as a revenue line item on a huge budget. We are a small business and we know the importance of being part of the communities we serve,” said Ashfield.

“We could have easily just expanded our Whitewood and Grenfell Herald Sun publication to include the Kipling area but then it would just be another outside newspaper trying to serve the community. We strongly believe that a community newspaper should have its own identity that is related to the area it serves. It’s coverage shouldn’t just be the odd story about the community that is published deep within the pages of another newspaper,” added Ashfield.

The name the Clipper pays tribute to Kipling’s world record paper clip, and the story that goes behind it, while it is also a metaphor to what newspapers are about. In a day when digital and social media seem to be an everyday part of life, newspapers continue to be the only true living archive and record of history for most communities. Because of that, the stories and photos that appear in our pages are often “clipped” out by people to hang on their fridge, save in their scrapbook or send to family or friends.

Readers of the Kipling Clipper will not only receive local news each week, but they will also be able to read stories from other Grasslands News publications that will be shared in the newspaper. The format allows readers to have a local newspaper that includes regional news. It also means people reading other Grasslands News publications will see news from the Clipper, which helps promote Kipling and area and gives advertisers additional reach.

“We have found that people want their own distinct newspaper but they are also interested in seeing what is happening in other communities throughout the area. So as we do with all our publications, we will provide all that with he Kipling Clipper as well,” said Ashfield.

The publisher went on to say that community newspapers are just that – a community. They are filled with stories about the people, places, businesses, organizations and events that happen in your towns. The are also the only permanent historical record for your community.

“Without them, there is no way for future generations to look back and see happened in the past and see what life was like the community — the people, places and way or life will not be remembered,” said Ashfield.

Covering the Kipling area for news will be local writer Connie Schwalm, a reporter with a long newspaper background. Local sports enthusiast Austin Vargo has also agreed to provide some sports coverage form the Kipling area. But as with any newspaper, we also rely on readers and community groups and organizations to help bring people the news.

“While we will work hard every week to publish the best newspaper we can, having community involvement is what truly makes the newspaper better for you and everyone in the community. That means helping to keep us informed about things like news, sports, events, interesting people, and any thing else you feel should appear in the newspaper,” said Ashfield. “The more the people from the community are involved, the better their newspaper becomes. And that’s what we want. We want the community to succeed and grow, because your success is our success. And this newspaper belongs to the people of the communities we serve.”

Starting up a newspaper in the middle of a pandemic, economic downturn and while people seemed more focused on social media than the world around them is something Ashfield said people have asked him about. But he says those challenges are what makes the newspaper more important now than ever before. He said because of things like social media, people are becoming disjointed from their communities and many business and organizations are no longer being noticed as they got lost in the shuffle and social media overload.

“There is actually a traditional media resurgence happening all across Canada and the USA. This comes as companies like Apple and Google are allowing people to block targeted algorithms and social media is becoming saturated and less appealing to people. Advertisers have recognized this and while they see their is a need for them to be on social media, they are also seeing social media is the bare minimum that they can do when it comes to reaching people. If they want to grow or be competitive they can’t just rely on social media. That can only be a small part of their campaign. That’s why we are seeing businesses coming back to traditional media like community newspapers,” said Ashfield.”

From now until Sept. 30, The Clipper is offering a year-long subscription for only $30, GST included. After Oct. 1 subscription will be $45, GST included. People can subscribe by filling out the subscription form on the back page or by calling our office toll free at 1-844-GNG-NEWS (1-844-464-6397), ext 222. Payment can be made using VISA, Mastercard or electronic transfer to accounts@grasslandsnews.ca

In Kipling, single copies can be purchased for $1.50, GST included, at the Co-op grocery store, Pharmasave, Shop Easy and Esso fuel station. In Windthorst, copies are available for sale at the Windthorst Tire/Tempo station.

Traffic disruption on Broadway St. due to road work