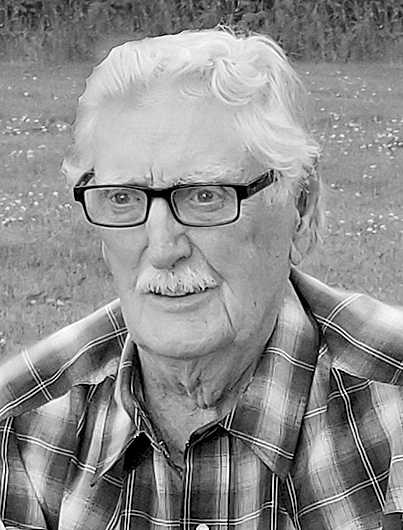 The family of John Fred Harrison of Weyburn, SK are deeply saddened to announce the passing of their beloved brother and uncle on May 3, 2021 at the age of 91.
John Frederick Harrison was born on Dec. 15, 1929 at the Whitewood Hospital. After the death of his father, John Harrison, in 1937, his mother Agnes (Lowe) moved the family from the farm to Whitewood. Fred, along with his older brother and sister, twins, James and Irene, and younger sister Lovella attended the Whitewood School. Even as a child, he was always willing to work and make a dollar. He was a paper carrier of the Winnipeg Tribune for several years and also hired out to local farmers in the summer holidays. After his schooling, he worked for the Department of Highways on the No. 1 and 9 highways from 1947 to 1950. He and his brother Jim worked in northern Ontario at a bush camp for Ontario Hydro in the winter of 1950-51. In the spring and summer of 1952, he drove a long-haul transport truck route from Saskatoon through Detroit, Chicago, Windsor and Toronto.
At the beginning of the oil boom in Saskatchewan, Fred left the highway department to work for the Independent Oil Exploration Company on the seismograph crew, eventually working in Rimbey, AB. In 1954, he went back to southeastern Saskatchewan. At this time, a new industry, Western Wire and Cable Company was starting up in Weyburn, and Fred was hired. In 1960 the company became Canada Wire and Cable. Fred was the treasurer for their local United Steel Workers Union for 23 years. He retired from Canada Wire and Cable after 35 years of service.
In 1958, Fred married Joan Johnson, the only child of Charles and Winnifred Johnson. Charles farmed in the Silverwood District and Winnie taught school there for many years. Fred and Joan made their home in Weyburn where Joan worked at Waddell’s Drugstore among other retailers. Joan died in 1969 after a brief illness at the age of 32. Devoted to her memory, Fred never remarried.
After his retirement, Fred chose to stay at his home in Weyburn. He outfitted his garage turning it into a shop. There he would work on his many projects such as rewiring and repairing motors and fixing obsolete equipment, welding and machining the necessary replacement parts.
Predeceased by his wife, Joan in 1969; and his brother, James Harrison of Whitewood; sister, Irene Towill of Whitewood and their spouses, Marian Harrison and Frederick Towill; as well as brother-in-law, Rudolph Jarvi.
Fred leaves to mourn his sister, Lovella Jarvi of Esterhazy; eight nieces and one nephew and their families including: Susan and Jim Davis of Livelong, Mary Lou Harrison and Pat Kleisinger of Regina, Gwen Mills of Regina, Gaye Harrison of Whitewood, Jacqueline Harrison of Saskatoon, Ruth Towill of Whitewood, Hugh Towill of Seoul, South Korea, Charlotte and Tim Raine of Langenburg and Caroline and Mark MacMurchy of Melville and their daughter, Jocelyn.
A funeral service for John Frederick Harrison was held on Friday, May 21, 2021 at St. Mary the Virgin Anglican Church with the Venerable Wilma Woods officiating. Interment followed at the Whitewood Cemetery. Funeral arrangements were entrusted to Fletcher Funeral Chapel of Weyburn.
The family wishes to thank St. Mary’s for opening the church to the family, the Venerable Wilma Woods and the Reverend Brian Woods, Weyburn Emergency Services and the caring and attentive staff at Fletcher’s.
Condolences may be left at:
www.fletcherfuneralchapel.com
Arrangements entrusted to
Fletcher Funeral Chapel & Cremation Services
Weyburn, Saskatchewan
306-842-5432