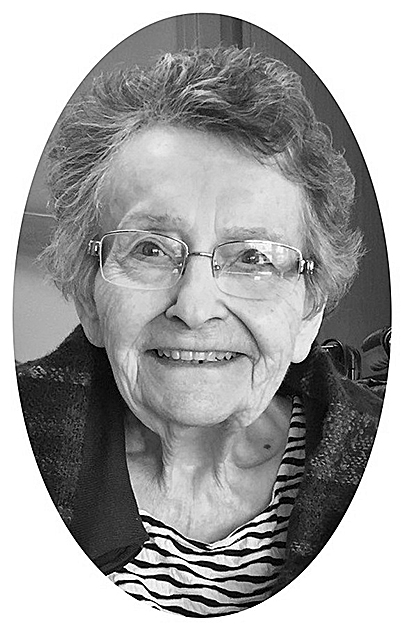 Eva (nee Sapara) formerly of Melville, Sask., beloved wife of August Matyas passed away peacefully in her sleep on Sunday, April 18, 2021 at Lakeside Manor Care Home, Saltcoats, Sask. She was 90 years of age.
As much as the family is saddened by her passing, we are also comforted in knowing her struggle with dementia is over and she is reunited with our dad.
Eva was born in Broadview on April 27, 1930 to Katie and Jack Sapara. She was the eldest of three daughters – big sister to Gene and Joan.
She was raised in Killaly where she went to school and helped out in the family grocery store and pool room.
She met the love of her life – August (Gus) Matyas of Lemberg at a local dance in Killaly and were married three months later on Nov. 23, 1948. They lived briefly in Calgary before moving back to Saskatchewan to make their home in Melville and raised their four children.
Mom was a full time wife, mother and homemaker who took pride in her home and in raising her family. Her cooking and baking skills were always praised – who can forget her nanaimo bars or flapper pie, which usually had a short shelf-life. Once the kids were in school, she occasionally worked at Bolme’s corner store and in the meat department at the OK Economy.
Eva loved to play cards and loved to win and a few cuss words might have been said when she didn’t. Mom had a big smile, hearty laugh and a bit of a temper too and we knew when we pressed her buttons too far. She also played bingo, went to movies and did word search puzzles. And boy could she and dad dance – it was wonderful to watch them polka or waltz around the dance floor. For a number of years mom and dad enjoyed working at weddings, anniversaries, Christmas and New Year’s Eve parties – dad was the bartender and mom sold the liquor tickets. And once the grandkids and great-grandkids were born, mom was always interested in what they were doing and she always had their favorite snacks available.
Mom and dad eventually moved to Queen Street Manor and enjoyed 10 years there together until dad passed away in 2007. She started having health issues in her 80s – macular degeneration, myasthenia gravis and finally dementia. It soon became apparent that mom could no longer live by herself and she was moved into two different care homes in Yorkton and finally into Lakeside Manor two years ago.
The family is so thankful and appreciative for the care she received and we will be forever grateful to the staff at Lakeside Manor. They were kind, caring and treated her like family.
Mom may be gone physically, but she will always be in our hearts! We will think of her when we play cards, have a drink of coconut rum or brown cow, or make one of her delicious recipes. Thanks for all the laughs and good times, mom!
Eva was predeceased by her husband, August (Gus); parents, Katie and Jack Sapara; mother- and father-in-law, Maria and Frank Matyas; in-laws, John Lema, Joe and Eva Matyas, Martin and Kae Matyas, Roy and Betty Matyas, Bill, Tom and Frank Matyas.
She is survived by her four children – Glenn (Wendy) of Winnipeg, MaryAnn (Rod) of Middle Lake, Blaine of Regina, James (Carol) of Saskatoon; her six grandchildren, Noel (Kristy) and Dana (Savanna) of Winnipeg, Shawn (Erika) and Nicole (Reagan) of Regina, Jared and Joel (Jessica, and son Jaxson) of Saskatoon; and her three great-grandchildren, Luca, Roan and Zara (Winnipeg).
She is also survived by her two sisters, Gene Lema of Regina and Joan (Gord) Gamble of Edmonton; two sisters-in-law, Eva Matyas of Penticton and Hilda Matyas of Chilliwack; nieces, nephews, cousins and friends.
Due to Covid, Eva’s Celebration of Life will be at a later date.
For those wishing to make a donation in Eva’s memory, please consider the following or a charity of your choice: Alzheimer’s Society of Sask. Inc., St. Henry’s Church Memorial Fund, Mass Offerings or St. Henry’s Parish Cemetary Fund.
Arrangements are by Bailey’s Funeral and Cremation Care, Melville.