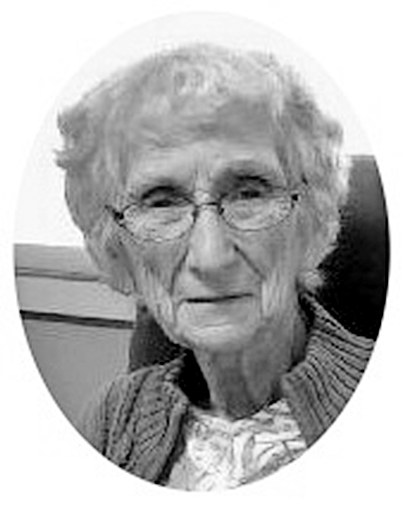 It is with great sadness we announce the passing of Olga Bohay on Tuesday, April 6, 2021.
Olga was born Sept. 8, 1922 in the Goodeve, Sask. district to Matthew and Irene Dumka. She attended Robert School. On July 19, 1942 Olga married Walter Bohay and with Walter settled on the family farm south of Goodeve until moving to Melville, Sask. in 1976.
Olga loved gatherings with family and friends and was always ready with a helping hand to help anyone who asked for any type of assistance. She also loved singing, dancing, playing cards and traveling to visit family, especially her grandchildren and great-grandchildren.
On April 6, 2021, Olga passed away at the Sunset Care Home in Regina, Sask. at the age of 98. Olga was predeceased by her beloved husband, Walter; her parents, six sisters; one brother; and one son-in-law. To cherish her memory, Olga is survived by one sister, Nadine; her two children, five grandchildren, seven great-grandchildren and many nieces and nephews.
Due to the Covid-19 pandemic restrictions, a private family service was held at Bailey’s Funeral Home in Melville, Sask. on April 16, 2021 with Father Basil Malowany as the Celebrant. The interment followed at St. Henry’s Roman Catholic Church Cemetery. A celebration of Olga’s life is intended to be held later, when it is safe to do so.
Thank you to all the staff at Bailey’s for all their help and the services they provided. Those wishing may make donations in Olga’s memory to a charity of their choice.
Our Lord has called, I have to go
It is his will, I told you so
Weep not for me, just say a prayer
God gave his word,we know it well
That, one day with him, we all will dwell.
By Olga
Funeral arrangements were in care of Bailey’s Funeral Home in Melville.