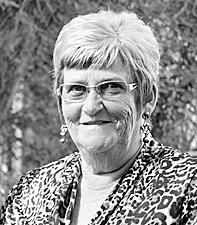 Brenda Joan Roe was born May 19, 1950 in Whitewood, SK. She passed away suddenly on September 13, 2015 at the young age of 65 in Moosomin, SK.  Joan was a dedicated worker; this part of her life consisted of a few different careers from working in nursing homes and waitressing to getting her hands dirty when she came to join Keith in the business they both grew to be very successful.

Joan enjoyed many things in life, but her favourites were by far having coffee with her friends, playing her internet games (pet rescue is going to miss her), gambling and sitting down to read a good book.

Joan is survived by Keith, her husband and love of her life for the past 23 years, as well as her beloved fur baby Tia.  Also left behind with so many memories are her sister Donna; stepchildren Tanis Stanhope (Randy), Jason Roe (Tanya) and Jarett; daughter-in-law Lynne Gaucher and special friend Teresa Tondu (Mark).  Left to carry on her extreme outlook on life are her grandkids Beth and Connor Gaucher; Maddy and Brayden Roe; Jordan Alyward; and Kyle (Misha), Kayla (Josh) and Austyn Stanhope; as well as many nieces, nephews, cousins and a host of friends.   Awaiting Joan in heaven are her beloved parents Donald and Mabel McDonald, her sister and partner in crime Marion Vigar, her son and  everything’ Mike Gaucher and her special little great-great-niece Sawyer Tebbutt.

Joan grew up in Whitewood, SK. After finishing high school, she moved to Moose Jaw for a few years until she found her way to Drumheller, Alberta. Despite leaving for other places throughout Alberta, she always found her way back to The Drum. That was until Joan and Keith met through mutual friends; then she was swept off her feet all the way back to living in Saskatchewan. They were married soon after she moved in. They have made many great memories over the years and had some wonderful holidays together. They both enjoyed Arizona, Mazatlan and Laughlin to name just a few. Their last trip was to Alberta and BC to spend some very memorable time with their grandchildren.