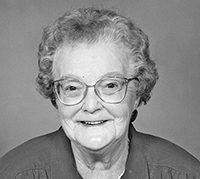 HERBERT – Reba Herbert of St. Paul Lutheran Home, Melville, Sask., entered her eternal rest on Friday, Sept. 11, 2015 at the age of 106 years.
Reba was born in Stambourne, N.S. on July 25, 1909 to William and Sarah Bent, the middle of three children.
Reba lost her mother at the age of nine years, and as a result she was relocated to Saskatoon to live with her mother’s family. There followed several years of tumult in her life until she came to Melville and was taken in by Nellie and George Pearson. The Pearson’s treated her as their own daughter, she became like a sister to Marjorie. This relationship lasted over 75 years, ending only with Marjorie’s passing.
Reba was married to the love of her life, Tom Herbert, on June 30, 1931 at All Saints’ Anglican Church in Melville. They were blessed with two sons, Ray “Red” and George.
Reba was a strong supporter of the Anglican Church, serving as treasurer of the Women’s Auxiliary for over 43 years, singing in the choir and actively participating in all church activities.
Reba worked in the sheriff’s office as a receptionist and court recorder. When her boys were born, she stayed at home to raise her family and be a good homemaker. Reba grew a large garden and preserved all the produce.
When the boys left home, Reba returned to work as a legal secretary for Maurice Tallant. Reba’s home was always open to all the boys’ friends and anyone dropping in was assured a cup of tea and goodies. She became known to all as aunt Reba.
Reba resided in her own home until she was 100 years old. Health concerns forced her to move to St. Paul Lutheran Home. She was a model resident, never complaining. She had a great respect for staff and this respect was returned with excellent care throughout her six plus years at the home. When asked how she was, her reply was always “Fine Dear”. She never wanted to bother anyone.
Predeceased by her parents; her husband, Tom; and granddaughter in infancy.
Reba is survived by Ray “Red” (Gladys) of Melville and George (Lois) of Victoria; five grandchildren, eight great-grandchildren and three great-great-grandchildren; along with many nieces and nephews.
Many of Reba’s friends and family visited her in the Home and she became known as “Gramma”, and to her family as “Old Gramma”. Reba especially enjoyed the Sunday services and still took communion.
Gladys’ brother, Ernie, summed up Reba and her attitude in one sentence, “I’m glad that Gramma is in our family because we need a Saint and she is one.
She will be dearly missed. We love you.
Funeral arrangements were in care of Bailey’s Funeral Home.