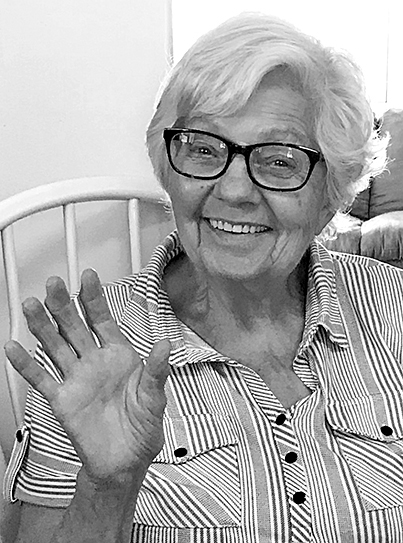 Lenore Alice Ostlund (nee Johnson), late of Melville, SK, passed away peacefully on Sunday, November 13, 2022, at the age of 83 years. She was predeceased by parents Harold and Hazel Johnson; sisters Lorna and Norita; daughter Leaette-Cathey (in infancy); and son Roger (2000). Lenore is survived by her husband of 52 years, Gordon Ostlund; son Randy (Theresa); son Rick
(Shelley); daughter Kelli (Tim); and son Tony; grandchildren Erin, Rhett, Victor, Marcus, Hannah, Mandi, Kayla, Tanner and Cooper; great-grandchildren Chayse, Blayke, Brex, Max, Kohen, Kade and Jack; as well as numerous nieces and nephews.
Lenore was born June 14, 1939, at home, 32-12th St., Weyburn, SK. She attended elementary school at Hague School in Weyburn and advanced to high school at Weyburn Collegiate Institute.
Some fond memories of Lenore’s childhood in Weyburn were hikes with Norita, Francie and Vicky, whereby they would walk along the tracks by the trestle bridge and make a bonfire to cook their food, make bachelor sandwiches, then pick wild strawberries for dessert. They also enjoyed exploring the Myrglod Salvage Yard where they would jump from tank to tank. Their adventures took them to the stock yards to ride the backs of cattle (nobody got hurt). Lenore fondly recalled Bill Myrglod’s geese getting loose and coming to their home. Eventually, her Grandpa Greer purchased one goose that Lenore tamed and kept as a pet named Mary. Mary followed her everywhere and would come to meet her at the end of her school day.
Lenore enjoyed working. Her first job was at Bill and Jen’s Drive-In as a carhop. After Grade 11, she worked for a time as a nanny. Lenore moved to Regina at age 16 and took a job as a telephone operator with SaskTel. She was homesick and returned to Weyburn, continuing her employment as a telephone operator until her first marriage at 19 years of age.
Lenore’s first child, Roger, was born in 1958, after which they moved to an oil camp in northern Alberta where they remained for five or six years. Randy and Rick were born while residing there, but they moved back to Weyburn after Rick’s birth. Lenore resumed work at SaskTel as a senior operator. Leaette-Cathey was born in Regina in 1963 and tragically passed at three days of age. Lenore lived for a time with her children, parents, sister and brother-in-law at 1425 Grey Street in Regina. She returned to school at Martin Collegiate in Regina to complete her Grade 12 before attending Success Business College, where she achieved the highest mark in the school on the Business Educators of America exam.
Lenore met Gordon in 1969 at Norita and Don’s house in Regina. After a brief courtship, Lenore and Gordon were married February 28, 1970. Shortly thereafter, they moved to Gordon’s family farm near Aylsham before settling in Melville to raise their family. Lenore began working at the Waverley Hotel in 1975-76 before assuming duties at the community college. She began a stretch as a domestic goddess for several years, raising five kids while volunteering for various teams, activities and committees. Lenore was an active member of Good Shepherd Lutheran Church while serving on council and many committees. Later, she took training through St. John’s Ambulance and was both a driver and attendant. She went on to work at City of Melville Tourism and Admin., Good Shepherd office administration for five and a half years, Prairie Pacific Wire and Cable, 5th Avenue Jewellery, Melville Housing Authority janitorial and finally as a recreation worker.
Lenore was a very dedicated wife, mother, grandma, great-grandma, friend and helper to many. She was a dedicated volunteer within her church and community. She will be greatly missed.
Lenore’s funeral service was held Saturday, November 19, 2022, at Good Shepherd Lutheran Church, Melville, SK, with interment to take place in the Melville City Cemetery at a later date. Memorial donations may be made to the Good Shepherd Lutheran Church Memorial Fund or the Canadian Mental Health Association, Melville Branch. To leave a message of condolence for the family or to make a charitable donation, please visit matthewsfuneralhome.ca
Arrangements were entrusted to Matthews Funeral Home, Melville.