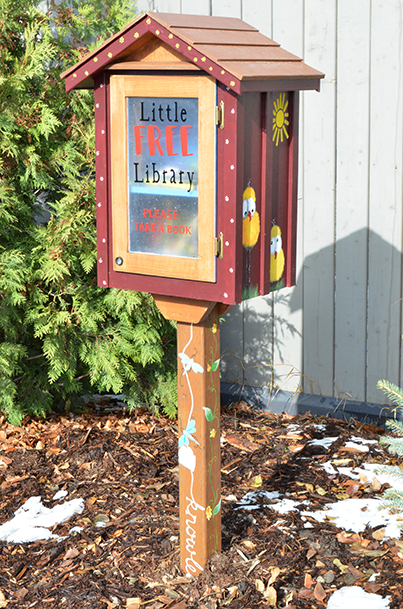 Residents in Wolseley and Whitewood have a new way to obtain free reading material through Little Free Libraries.
Todd H. Bol built the original Little Free Library in 2009 and placed it in his yard in Wisconsin as a tribute to his mother, who had been a teacher and lifelong reader. His “take a book, share a book” idea became so popular that three years later he established a non-profit organization to help others set up book exchanges in their own neighborhoods. The result was a network including thousands of Little Libraries around the world.
The free book exchange boxes usually resemble a small house or cupboard with a door but may feature other designs, provided they are waterproof. For example, a Little Library in Grenfell is constructed from a blue, plastic tank and PVC pipes. Yet they all serve the common purpose of increasing access to books. The concept is simple: individuals choose a book to take home and, if they are able, donate a book in its place.
A Little Free Library has just been installed beside a fence on Front Street in Wolseley, west of Sherbrooke Street. Librarian Michelle Williams spearheaded the project.
“We have many books at our library that had to be taken out of circulation. We offer a book sale but I thought it would be a good idea to offer free books as well by getting a little library built like other communities have,” Williams told Grasslands News.
Community members donated time and supplies to construct the Little Library.
“I reached out to a citizen of Wolseley, an excellent carpenter who loves to do small building projects in his workshop. He graciously accepted to build it from a picture I provided. He also donated the material and labour for it,” Williams explained. “I then reached out to our paint specialist at Wolseley Home Hardware and she offered to paint it for me. She had her friend with artistic ability add pictures and designs to the library. It turned out awesome!”
Two more Little Libraries were recently placed in Whitewood near the Splash Park and at the Town Square. These are in addition to a tiny library at the corner of 5th Avenue and Green Street that was established last year to honour Jim Hamilton. In addition, there is one at the campground on Arnold Street in Broadview. Another was installed in Grenfell in 2019, in the parking lot on Front Street across from the GRP Arena. There is also a wooden one attached to the wall outside the bakery on Grand Avenue in Indian Head.
Local librarians help maintain the little boxes and ensure there is an adequate supply of books but residents are encouraged to share their resources as well.