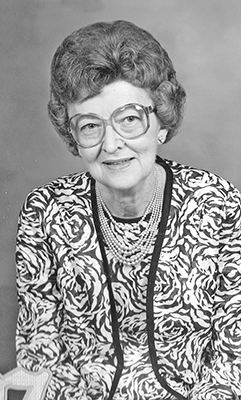 LOTS – Esther Mae Lots of St. Paul Lutheran Home of Melville, Sask., wife of the late Bill Lots, entered her eternal rest on Wednesday, Oct. 21, 2015 at St. Paul Lutheran Home at the age of 100 years.
Mae was born in Otthon, Sask. on Jan. 9, 1915, the third daughter of Libby and Roscoe Wilder. Later they moved to Melville where she attended school and graduated Melville Business College where she became a legal secretary.
On Oct. 25, 1939, she married Bill Lots, co-owner of the Waverley Hotel. She remained in the law offices until the passing of Bill’s mother when she took over managing the domestic staff at the hotel. After retirement they remained in Melville. In Mae’s words, “I never had any desire to live anywhere else.”
She was a member of the United Church and the Eastern Star.
Mae is predeceased by her parents; loving husband, Bill; sisters and brothers-in-law, Grace and Jim Ball, Ethel and Bert Ball, Margaret and Charles Bennett, Olive and John Symon and Jack Bowdige.
She is survived by her youngest sister, Clarice Bowdige; and numerous nieces, nephews and great-nieces and great-nephews, among whom are a nephew and niece she was very close to, Greg (Bev) Bennett, who were not only close to her, but also helped care for her; and her niece, Libby (Murray) Boyarski.
Arrangements were by Bailey’s Funeral Home, Melville.