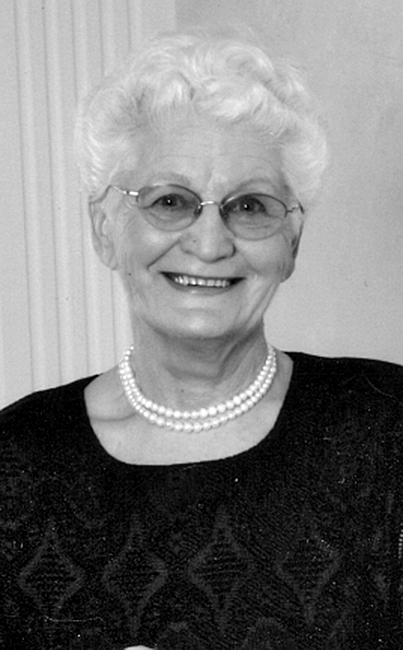 Alvina Rose Gelowitz was born on Jan. 31, 1929 in the Grayson District of Saskatchewan, a daughter to Anton and Josepha (nee Klein)
Gelowitz. Alvina received her education at Grayson School. She remained on the family farm.
Alvina and Adolph Appell were married June 17, 1947 at St. Mary’s Catholic Church in Grayson. They began farming two miles west of Grayson. Alvina was an active farm wife and mother helping with farm chores and raising six children.
Alvina and Adolph moved off the farm in 2005 to relocate to Melville. Adolph passed away in 2016. Alvina remained in her suite until she moved to Caleb Village in Melville in 2021, later she moved to Saskatoon with her daughter and son-in-law, Genevieve and Stuart, who cared for Alvina until her last days.
While busy on the farm, she also used her gifts and talents in various ways; by being an amazing cook, seamstress, cake decorator, and gardener. She enjoyed knitting, crocheting and liquid embroidery. Alvina faithfully attended Mass on Sundays and many weekdays, she was active at St. Mary’s Church as a reader, sacristan, member of the church ladies and parish council chairperson.
Later in life, Alvina enjoyed reading, writing and receiving handwritten letters, watching her favourite TV Channel (EWTN) with daily Mass, and her daily prayers which included her love of the Rosary.
Alvina always welcomed family and friends who came to visit especially her grandchildren and great-grandchildren.
Alvina entered her eternal rest on Wednesday, June 22, 2022 at the age of 93 years. She was predeceased by her parents; husband Adolph; sons, Kenneth and Herbert; sisters, Martha, Lena, Lillian and Genevieve; brothers, Rudy, Chris and Ted; brothers-in-law, John Flegal, Jim Varga, Fred Bogdan; sisters-in-law, Marion Gelowitz and Laraine Gelowitz.
Alvina leaves to cherish her memory: her children, Benedict (Fay) of Yorkton, Anita (Doug) Hutton of Regina, Genevieve (Stuart) White of Saskatoon and Anna Marie (Leonard) Gadica of Melville; six grandchildren and nine great-grandchildren; sisters, Mary (Joe Dauk) and Linda Fraser; sister-in-law, Marie Gelowitz; and numerous nephews and nieces.
Prayers were held Sunday, June 26, 2022 at 7 p.m. at the Chapel of Bailey’s Funeral Home, Melville, with Father Andrew Sowa, OMI, as the presider. The funeral mass was celebrated on Monday, June 27, 2022 at 10 a.m. from St. Mary’s Roman Catholic Church in Grayson with Father John Mock as the celebrant.
Arrangements were by Bailey’s Funeral Home, Melville.