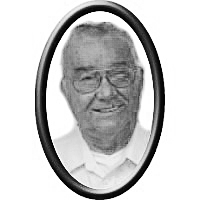 Koenigbaur – Rudolf (Rudy), Dec. 19, 1931 – Aug. 15, 2015, aged 83, passed away at the Yorkton Regional Health Centre.
Rudy was born to Otto and Annie Koenigbaur (nee Sterzer) in the St. Philip’s District. When Rudy was 16 years old he moved off the family farm to Melville, Sask., where he worked at John’s Esso Service Station. In 1956, Rudy joined the CNR as a fireman and continued on to become an engineer.
While working in Melville, he met and fell in love with Carol Schappert; his cute waitress at the Waverley Hotel Restaurant. Rudy and Carol married in 1970 and bought their farm in 1971, where they raised their daughters, Lynn and Brenda.
Rudy was a grain farmer his entire life and worked on the CNR for 40 years, retiring in 1995. Rudy loved all his family and friends. He cherished every visit he had with them, sharing
stories, ideas and memories. Rudy was always able to find someone to talk with, wherever he went.
In later years, Rudy began kidney dialysis for which he continued for over two years, during which his body was slowly deteriorating. He spent the last 10 days in hospital where he peacefully passed away in his sleep.
Rudy is survived by his wife Carol; daughters, Lynn (Kevin) Sabo, Brenda Koenigbaur (Kris Turchenek); brothers, Ben and Laurie; sister, MaryAnn (Tim) Wollard; as well as several nieces and nephews.
He is predeceased by his parents, Otto and Annie; and by his brother, Ranny.
Mass of Christian burial was held Monday, Aug. 24, 2015 from St. Philip the Neri Roman Catholic Church, St. Philip’s, with Fr. Marcin Mironiuk officiating.
Interment was held Aug. 25, 2015 from St. Henry’s Catholic Cemetery, Melville, with Fr. Mieczyslaw Mitch Burdzy officiating. Those so wishing may make memorial donations to Telemiracle, in memory of Rudy as tokens of remembrance. To leave a note of condolence for the family please visit Wolkowski.ca.